The USB speakers offer a great sounding set of drivers producing very dynamic sound that sets itself apart from the competition, but come just a bit short in terms of streamlining the user experience.

With notebooks and other mobile computing platforms rising to popularity, many peripheral manufacturers cashed in by introducing ultra-portable speakers for those devices. In the USB portable speaker category, there are no more than a plethora of choices from many different manufacturers. Altec Lansing Orbit brings its prowess to this market. Priced very competitively at $49.95, will these speakers offer enough bang for the buck? Read on to find out.

Out of the box, the Orbit looks very reminiscent of the Z305 from Logitech, sharing the same sound-bar design. However, these speakers are much more than meets the eye, as a simple twist separates the two speakers and reveals the cabling needed for connectivity. Thankfully, Altec Lansing remembered to include metal foldable stands on each of the speakers, and have small rubber grommets to ensure stability. 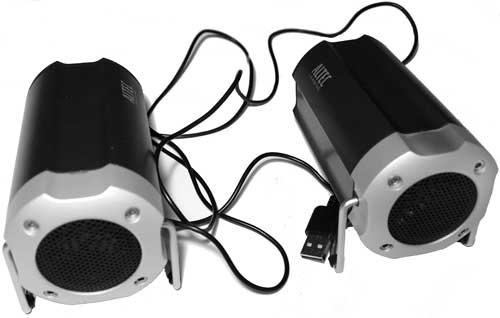 However, on the slightly negative side, that is pretty much the only parts of these speakers that is metal. Although the plastic housing is made out of very thick and durable ABS, they are styled to look metallic. I would have preferred it to be actual metal for a better sense of solidarity, but for the asking price, I can’t be too picky.  Attached together, the Orbit is similar in size to two stacked 355 ml pop cans together. In comparison with the Z305, it is considerably stubbier but only weighs a tidbit more. This warrants great portability as it can be stuffed into a backpack without any problems, and the weight shouldn’t be more noticeable than a bottle of water.

After separating the two speaker units, the USB connector and 3.5mm interconnection cable can be found wrapped in storage compartments in the right and left speaker housings respectively. This is a superb configuration to bring to a pair of highly portable speakers, as the left and right units can be replaced independently if lost or broken. However, this does reveal a flaw in the functionality of the Orbit, as it lacks the diverse functionality found on the Z305. While the Logitech features headphone out and on-unit volume controls, the Altec Lansing is restricted to its only function as to being USB speakers. It also means you won’t be able to connect the speakers to an iPod or any other source with a 3.5mm headphone jack. Now, let’s see how they perform.

Sporting 40mm drivers, twice as big as the ones found in the Z305, the Orbit certainly has the capabilities to produce some great sound. The biggest difference between these two speakers is that while the Logitech has a fixed speaker layout, the Altec Lansing’s left and right channels are adjustable to eliminate the veiled sound produced by the former. The end result with the combination of the speakers and audio sweetspot, the Oribt USB speakers are incredible performers for the money.

In terms of power, the Altec Lansing speakers are just as loud as the Logitech Z305, and do so without distorting the sound quality greatly. However, one thing to mention is that the Orbit actually responds well to volume controls. Unlike the Z305, which essentially sounds equally loud from 20 to 80% using Windows volume adjustor, the Orbit scales very well, and each percentage is noticeable to allow fine tuning of the volume to suit each environment. Lastly, these speakers are by no means shy on volume either. They can easily fill a room with great sound, although the quality may vary as you move from the audio sweetspot.

back at the Orbit speakers, they have a great deal to offer in terms of sound quality over the competition, and for a very reasonable price. With a few minor regrets, Altec Lansing managed to create a pair of speakers offering superb portability and build quality. In the price bracket that the Orbit USB occupies, I cannot really criticize too much in terms of sound quality as it does offer a superb bang for the buck. Going against the Logitech offering, the Altec Lansing certainly proved itself to be a lot better in the role of speakers. However, as a functional package, it does shy away from the ease of use presented by the Z305.

The only thing I wish for in future Altec Lansing is to really fine tune the user experience like Logitech does. Using the speakers fully deployed, I noticed a messy pile of cables, and packing up these speakers was no easy task as they do not offer any retractable cables or guides. Once these slight oversights are fixed though, I believe that the Oribt could become the perfect set of portable speakers in the $50 price range.