Excellent performance combined with excellent style, the Belkin In-Desk USB hub leaves nothing to be desired.

The Belkin In-Desk 4-port USB Hub’s design is quite pleasing. The flush mounting design allows it to blend in with the desk so that it appears as if it was meant to be there rather than some random device causing clutter on your desk. The raised USB ports make it easy to access and the openings on each side work great for hiding excess cable and reducing the clutter. The hub itself sticks up from the desk approximately 1.25″ and the power and USB cable connect from underneath. As you can see from the picture below, even when the hub is fully loaded, it is far from cramped, making it easy to plug or unplug devices. 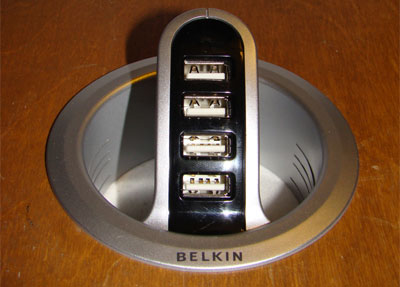 Unfortunately there aren’t any status LED’s for the hub so unless there is an LED on the device that you are plugging in, you may not know if it is working. While not something that is a huge deal, to some it may be bothersome. One thing that surprised me was how well the hub accommodated the larger USB devices. Two devices that I have had problems with in the past fitting into stacked USB ports was the Moxia USBCell and the Corsair Padlock thumbdrive. As you can see from the picture below, the Belkin hub has no problems with everything plugged in. 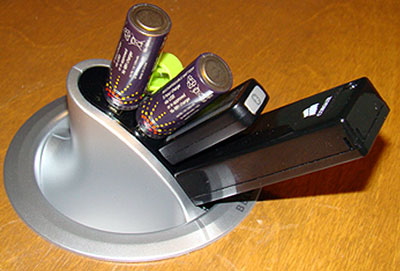 Belkin 4-port USB hub shown with oversized USB devices.Belkin even put a little bit of thought into the power brick that is used to power the hub. Instead of it being a large, bulky one that blocks additional power connections on your power strip, they opted for one that hangs over the side and doesn’t block the adjacent receptacles. 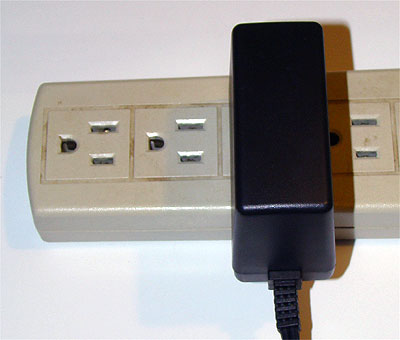 The two openings on the sides of the hub allow you to route your cables and reduce your desk clutter. With the openings being on either side this allows for placement anywhere on your desk, not just one side or the other. 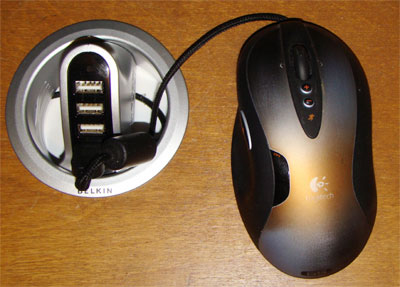 Openings on either side allow you to hide long cables.

On the underside of the hub are the connections for the USB cable and power. They plug straight in and can be tied up with the rest of the cables that you route through the holes, making for great cable management. 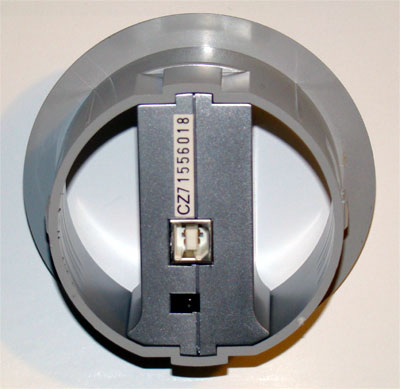 The bottom of the hub where the USB and power connections reside.

Installing the Belkin In-Desk 4-port USB Hub couldn’t be simpler, provided that your desk has pre-drilled grommet holes. The hub comes in two pieces that just snap together and then fit in the grommet hole. After connecting the power and USB cable, the hub is ready to use. If you aren’t lucky enough to have a pre-drilled hole for the grommet, then you will need to make one yourself. To do so you will need a drill and a hole saw such as the one pictured below. After drilling the hole you will be ready to go. 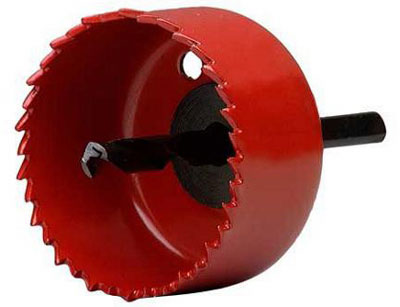 One of the problems with USB hubs is that they inherently cause some performance degradation since they cause devices to share bandwidth. Some hubs simply provide better performance than others so it is important to not only test a single device on the hub, but also with the hub filled up. The Belkin provided excellent results in all tests. 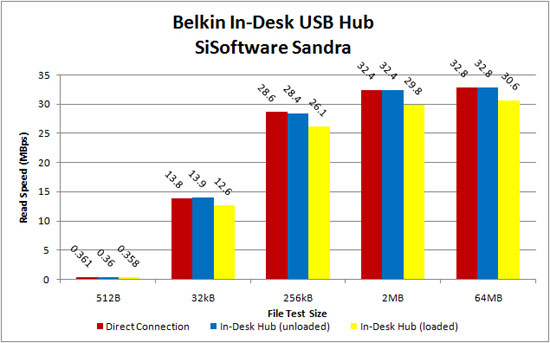 As you can see from the results, the grommet hole 4-port USB hub performs flawlessly. Results from the drive connected to the PC vs. the hub were almost identical. Even when other devices were sharing the bandwidth the performance degradation was minimal and to be expected, which was about 7 – 8%.

The Belkin In-Desk 4-port USB hub is extremely easy to install and its performance is top notch. With so many options available, there is almost certainly a model available to suit your needs. After using this hub, I simply can’t find any reason to NOT recommend it to anyone searching for a hub to use at their desk. The only drawback to this hub is that it isn’t mobile and doesn’t have any status LED’s.