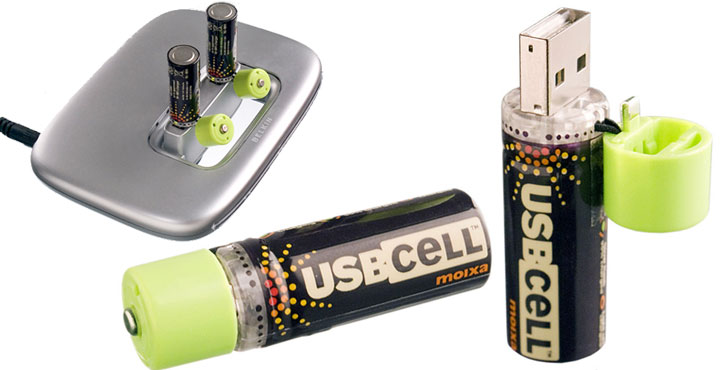 For users that are on the go or don’t want to worry about a battery recharger, the USBCell is perfect. For the rest that need a high-endurance battery for power hungry devices will want to look elsewhere.

On the surface, the USBCell AA batteries look identical to any other AA battery but that is where it stops. The green end on the positive terminal of the battery is actually a cap that conceals the USB connector for charging. This cap fits on snugly and also clicks into place via the two small openings on the connector itself. The cap is also attached to the battery via a short elastic cord to ensure that you will not lose it, but allowing the flexibility to move it around in case you are charging the battery in a cramped space.

When the USBCells are plugged in to charge, there is a LED that lights up just past the cap. This LED gives you a status of the batteries progress during charging. While the battery level is below 90% and charging, the LED stays solid. Once the battery level reaches 90%, the LED begins to flash letting you know that it is almost charged, and the battery itself enters a trickle charge to ensure that it charges to 100%. 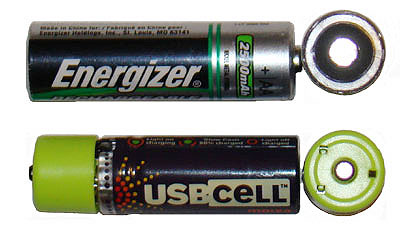 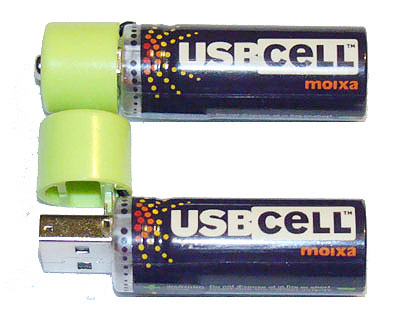 The cap – on and off 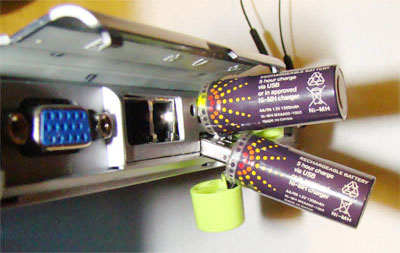 Too big for stacked USB ports

In probably what will turn out to be the limiting factor for the USBCells is the limited amount of power that they are able to provide. While current alkaline AA batteries are capable of providing 1700mAh (milliamp-hours) and NiMH rechargeable batteries are capable of 1400-2900mAh, the USBCell batteries are only capable of 1300mAh. Now I’m not an electrical engineer, but I can deduce with some certainty that this is inherently due to the design of the USBCells and that the size of the storage cell in the battery must be smaller to make room for the USB connector. You can’t really blame Moxia for this as it is really a technological hindrance that prevents them from lasting longer. Batteries are simple to understand, the large the storage cell is, the more power that can be stored.

Other than power there are a few things to worry about when recharging the batteries. The USBCell batteries are designed to charge for about 7 hours with a 250mA current. While they may be recharged using a battery charger designed for NiMH batteries, you cannot use the fast-chargers that claim to take less than 1-2 hours. You also need to worry about that USB ports that you utilize to charge the batteries. Those of you that choose to use laptops will want to make sure that you USB ports do not reduce power to conserve the battery of the laptop and you will want to make sure that if you are using a USB hub that it is powered and not passive. Most desktop PC users should be fine however if you have any doubts, read their FAQ.

To measure the performance of the USBCell batteries, we measured battery life as well as charge time. We also compared these measurements to a pair of Energizer Ni-MH 2500mAh AA batteries to give you an idea of how well they stack up against what you probably already have around the house.

Charge time for both sets of batteries was taken for a complete charge when the batteries were fully discharged. It took 6hrs and 52 minutes for the USBCells to fully charge compared to the 6hrs and 8 minutes required for our Energizer batteries. This is mildly disheartening as the capacity of the Energizers is almost double that of the USBCells, yet take just marginally longer to fully charge.

To measure the battery life of the USBCell batteries we tested them in both our Kodak C743 digital camera and the Wii remote. First up was the digital camera test. All pictures were taken with flash. The USBCells were able to snap 762 pictures before the camera refused to take any more pictures and powered off. I felt that this was rather impressive until I began taking pictures with the Energizer batteries and was able to take a whopping 1715 pictures before they died.

After letting my fingers rest from what seemed like an eternity of taking pictures and allowing both sets of batteries to charge, I began to play with the Wii. Fortunately I was blessed with the release of Super Mario Bros. 3 via the Wii’s Virtual Console and Super Mario Galaxy so that I had plenty of fresh gameplay to explore. The Energizers won the battle again coming in at about 22 hours of gameplay, but the USBCells were able to keep us going for just over 12 hours.

The USBCell batteries work as advertised. As with any AA battery, they will power your device and keep you going till they die. Unfortunately for the USBCells, battery life is a little shorter than other options available on the market for roughly the same price. The upside is that you will never be left looking for your battery charger in the future, just an available USB port. You will ultimately have to make the decision of what is more important to you, convenience of recharging or longevity of use before recharging is required.