This is everything you could want in a flash drive. It is pretty fast, still reasonably sized and comes with virtual desktop software for only a small increase in price over the basic ERC model.

On first blush, the Express RAM Cache looks a lot like one I reviewed a little while ago; albeit this one is silver with black highlights whereas the other has black highlights. This is to be expected as they are basically the same thing with just one small but crucial difference: Super Talent added on a cache chip to the RAM Cache. The reason this is such a big deal is that this allows the onboard controller to well… cache write commands (among other things) so that it doesn’t stutter, pause or anyway slow down during times of heavy IO demand. 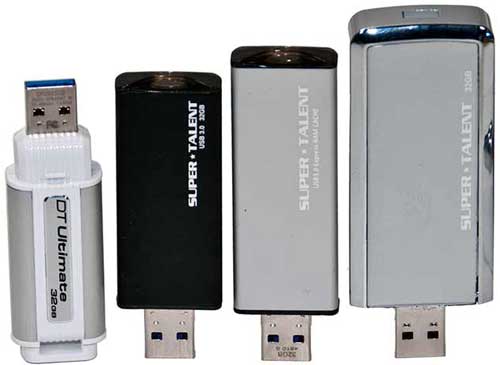 One little 32MB DRAM chip doesn’t sound like such a big deal, but in reality this is a huge deal. Ask anyone who used the older first generation Solid State Drives and they will tell you that they did get slow from time to time, yet as soon as cache chips (usually 32 – 64MB) was added the next generation’s user experience was vastly improved. The same applies here, while it is doubtful you will use your Express RAM Cache to boot a system off of, you could. Not only does this DRAM chip allow for a more smooth experience it should also boost low file size write performance (Super Talent claims “up to” a 300 percent increase in performance). That is how crucial this “minor” tweak really is.

Of course, adding in an extra chip does mean that this drive is a tad longer than the regular Express. To be precise, this drive measures 87.5 x 25.0 x 8.0mm, whereas the Express Drive is 62mm long and 7.5mm tall. This really is neither here nor there when you think about it as it still is fairly small and much more compact that some of the massive flash drives we have all seen. The other potential negative is increased heat load, as now you got all those NAND chips, controller chips (bridge controller and NAND controller) as well as a DRAM chip creating heat; or at least that is what you would think would be the case, in reality this actually is a moot issue. Super Talent released a firmware update for their Express line awhile back that basically made them extremely cool to the touch and it appears the Express RAM Cache also comes standard with this firmware. To put it bluntly, this drive is cool to the touch; during even extended testing it barely gets warm. 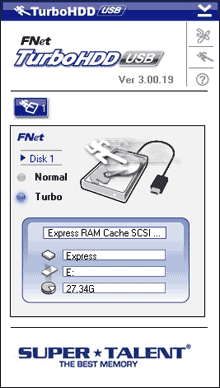 As expected, the Express RAM Cache comes with Super Talent’s great Turbo boost program which over-rides the default MS drivers and allows this drive to perform at full power via custom drivers. This is nice, but the real claim to fame of this particular kit is the Ceedo Personal 4.0 software. Sadly, Super Talent does not include it with the drive, rather you just get a serial number and certificate of proof of ownership and directed to download the latest version from Ceedo’s website. This really is neither here nor there in the grand scheme of things, but it still is a tad annoying.

To be honest, what was much more annoying was the fact that while you certainly are paying (albeit a rebated) price for Ceedo Personal, it is directly tied to the Express RAM Cache drive and you cannot use your serial number to install the full version of Ceedo on another drive. Heck, you cannot even install it to another Super Talent drive. This means that if you lose the drive or it dies (after the warranty expires of course) so too does your serial “die”. At the very least it should be transferable to another Super Talent drive and it is a shame that my SuperCrypt couldn’t be used to leverage the full power of Ceedo.

When it comes to the actual performance of this piece of software, I was fairly impressed. This is where the on-board DRAM really comes into play as it made installation of software very quick. Better still the performance hit from loading a program via Ceedo vs. installing it and loading on your “real” operating system is fairly minor. Of course, it does depend greatly on what your system specs are as while it was very comparable on my older Intel quad core with VelociRaptor hard drive, the Express RAM Cache + Ceedo combination did lag behind compared to my high end, six core AMD with Solid Sate Drive rig. 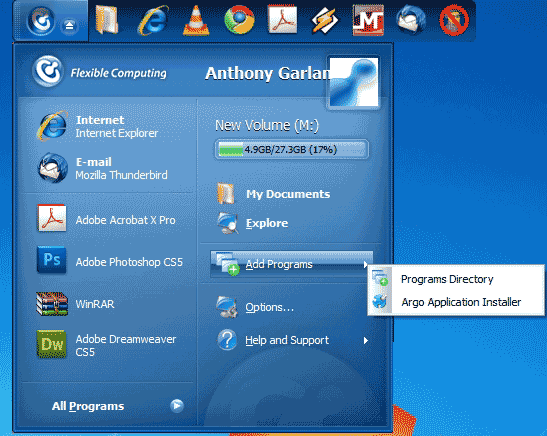 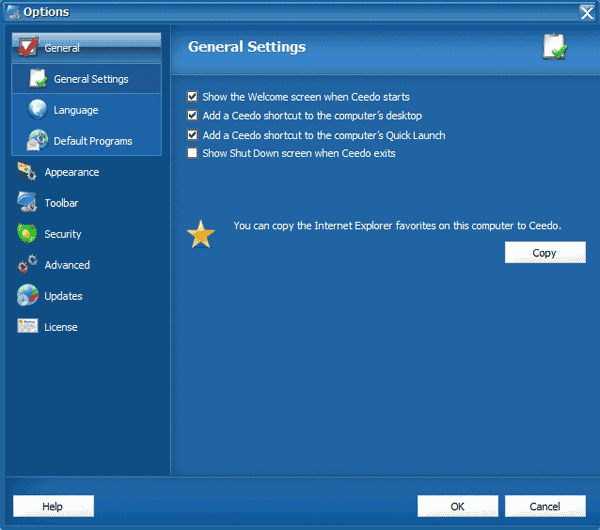 Also on the positive side, this program is extremely simple to use. It loads a “toolbar” that reminds me a lot of the widget toolbar from Apple’s OS X, and it loads the most used programs along this toolbar. If you want to add more, or use more that are not shown simply click on the Ceedo icon in the left hand corner and this pops up an interface which could easily be a dead-ringer for Windows 7’s. To actually install a program you have two options, point it to where the executable installation file is and install it just as if it was being installed to your “real” operating system, or chose to download and install one of the myriad of software options Ceedo has already compiled for you. If you chose this latter option, Ceedo Personal will open up Internet Explorer (the portable version which comes pre-installed on itself) and loads Ceedo’s website where you can chose which one to install.

Sadly, while it is very easy to use and very peppy for a virtualization program, there are a couple major caveats worth pointing out. The first is that while it works reasonably well on older XP systems, there seems to be a bug with Ceedo in that none of the drop down boxes would work. This meant that while I could run any already installed program I could not install anything new. I had to plug the Express RAM Cache drive into a Windows 7 (or Vista) system and install it there (where there was absolutely no issues).

The other caveat is not all programs will allow you to install them into a virtual “sandbox” setup like Ceedo, nor will all programs you install work. For example, even on Window 7 64bit environment Photoshop CS5 64bit would not work, but the 32bit version would. This is the mildest issue I ran into, with the worst being the fact that no version of Microsoft Office I tired (everything from 2003 to 2010 versions) would install. It would error out with .dll error and refuse to install.

In grand total, out of 32 programs I tried (via the “official” setup files and not the ones hosted by Ceedo), I ran into 2 minor issues which while annoying still allowed the software to function; and I ran into 2 major issues where a given program either refused to work or refused to even install. Luckily, for all the major issue programs there was an alternative. For example, Malwarebytes Anti-Malware refused to work (error 453), but SuperAntiSpyware worked perfectly; since I couldn’t use MS Office, I tried OpenOffice which worked fine.

In the end, I think Ceedo Personal was well worth the $20 dollar premium Super Talent charges, as while it is not anywhere near as powerful as ThinInstall, nor as flexible as a fully sandboxed system like VMWare, the ease of use does make up for a lot of its minor issues. Better still, the price of this vs. those other options makes Ceedo’s quirks minor and well worth the occasional headache.

Also as expected the read speed of this drive delivers decent mid grade performance, but the star of the show is the write speed. This drive’s “write to” numbers are simply in a different league altogether from its Express Drive counterpart. 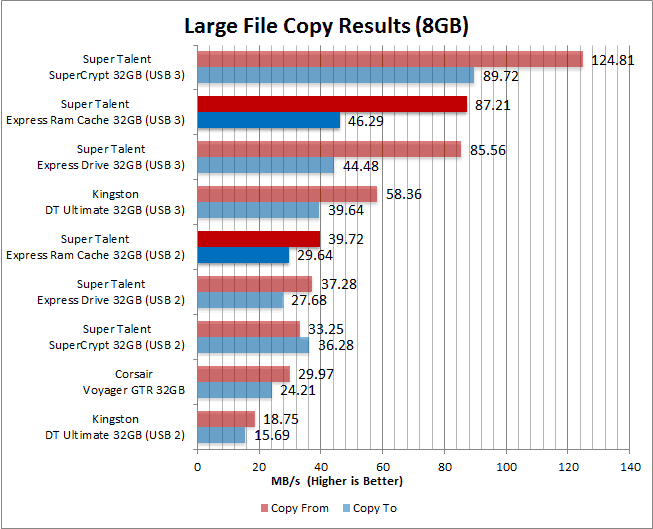 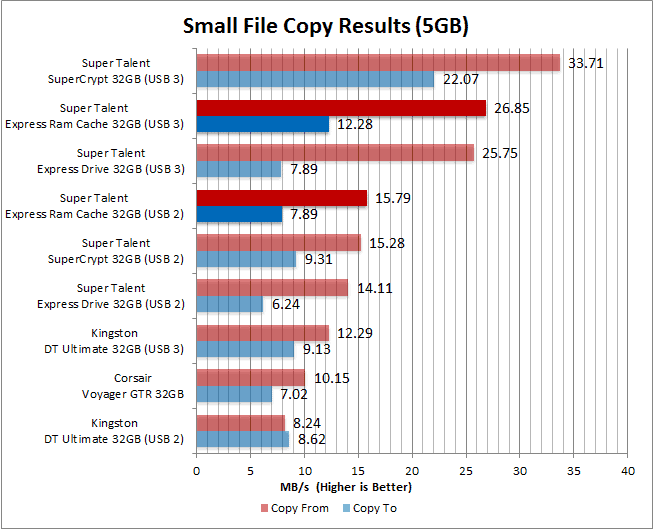 As you can see, the read speed numbers the drive post are very good, but the writes are the most impressive. 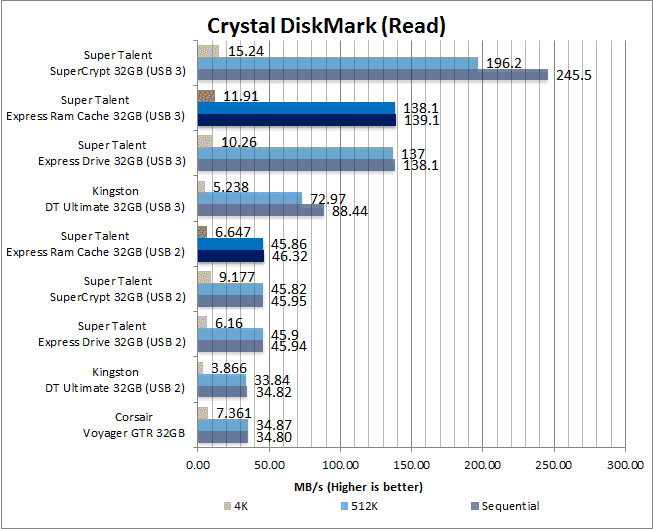 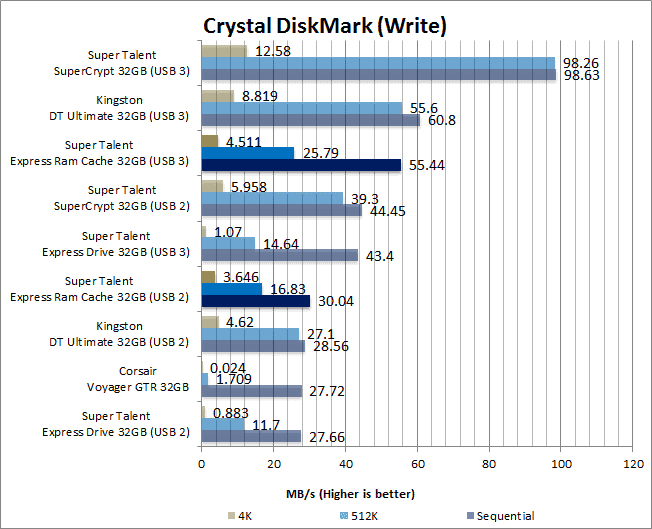 While my experience with Ceedo was not perfect, I think that it is probably the most user-friendly, easy to use virtualization program I have come across. It is easily worth the full asking price Ceedo wants for it and that Super Talent is including it for about half price really does underscore their commitment to their customers.

That is the software half of this kit; on the hardware side of things, the Express RAM Cache is one heck of a flash drive. I had very high expectations for this drive and I was not disappointed. This drive has very good read speeds that make it a good choice for Ceedo; but what really impressed me was the write speed. Even if you are not interested in the virtualization bundle deal, the base version should be on your short list.

Honestly, unless you have a super high end system, the performance impact from using this bundle kit will only be minor compared to actually installing a program locally. Add in the portability and flexibility this combination offers and you really have a bundle that is more than the sum of its parts. If you are looking for USB 3.0 flash drive and can afford the asking price, the Express RAM Cache + Ceedo bundle kit is a very good option.