The PCI Express card is a potent upgrade for anyone not wanting to go through the hassle of upgrading a motherboard. Just be prepared to ignore the SATA6 ports unless your motherboard is on the ASUS qualified list. 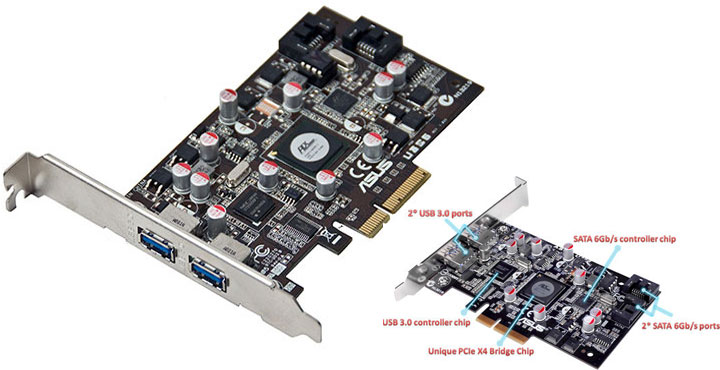 Not everyone can justify the cost and hassle associated with upgrading their motherboard to get USB 3.0; however, many are ready and willing to invest the couple moments and few dollars it takes to plug in a frugally priced PCI Express USB 3.0 card and upgrade their system. One such option for consumers is the Asus U3S6, which boasts not only two USB 3.0 ports but also ups the ante with a pair of SATA 6Gb/s ports. Is its reasonable asking price and potential power a combination worthy of your time? Let’s find out!

Unlike many daughter cards on the market today, the Asus U3S6 is not only a USB 3.0 card but also a SATA 6Gb/s expansion “combo” board. This versatility coupled with its all-black PCB does make for one sexy upgrade. For an expansion card, the U3S6 is certainly a beefy package measuring a good 4.8 inches long. While it is longer than most, it still is only a single slot solution as all the controller chips are considered low power, with no bulky heatsinks required to keep them cool.

One noteworthy feature is while the card is long for a USB 3.0 adapter card (especially compared to an x1 like the Gigabyte GA-USB3 card) it still is a low profile card. You simply have to be able to source out a low profile bracket (which is not included) or do without a bracket altogether to use it in a smaller footprint HTPC system (for example). This does make this card extremely versatile as many consumers wanting to upgrade a system to USB 3.0 are doing so because it will make transferring files to and from their HTPC all that much quicker.

The controller chips responsible for this versatility are the NEC D720200F for the dual external USB 3.0 ports and a Marvell SE9123 chip for the dual internal SATA 6Gb/s ports. All ports are of course backward compatible with their earlier perspective standards. While it is unfortunate that the USB ports are external only and the SATA 6Gb/s ports are internal, this is a limitation of the controller chips and not an oversight on Asus’s behalf.

Both of these controller chips are rated for only two ports each and this is the most logical setup with such a limited number of options available. Rounding out the features of this board and taking it from the merely ordinary to the extraordinary is the PLX bridge chip. This is the chip that allows the onboard controller chips to take advantage of more than 1 PCI Express 2.0 lane of bandwidth. This trifecta of chips is literally the same setup Asus uses on their latest motherboards to offer USB 3.0 and SATA 6 to their customers; albeit with a higher markup than $30. 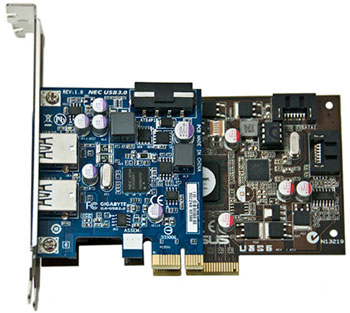 There are only two caveats to the Asus U3S6, one minor and one major. The minor one is universal to all adapter cards in that you will need to install the NEC USB 3.0 and Marvel SATA drivers before you can take advantage of the USB 3.0 and SATA 6Gb/s ports. This is an extremely minor issue, as the drivers are included on the accompanying CD. The major caveat to the U3S6 is it does require an x4 PCI slot and not the more typical x1.

In many cases, this means you are going to have to populate a 16x “graphics card” slot as your motherboard probably won’t have any available x4 slots. The upside to providing 4 lanes for data throughput is that in theory any of the USB 3.0 (600MB/s) ports or the SATA 6Gb/s (750MB/s) ports could theoretically saturate one PCI-E 500MB/s lane all by themselves and cause a performance bottleneck. In reality, it is doubtful any single device will be able to do this in the near future, but the U3S6 is more future-proof than its x1 brethren because of this forward-thinking interface.

On the positive side, the Asus U3S6 does not require any external power sources. It can draw all the required power from the PCI-E slot. This is a very nice feature as having to plug in a Molex connector to an expansion card does detract from the clean look many users want and more importantly can impede the airflow to the PCB’s controller chips which they require to keep cool. 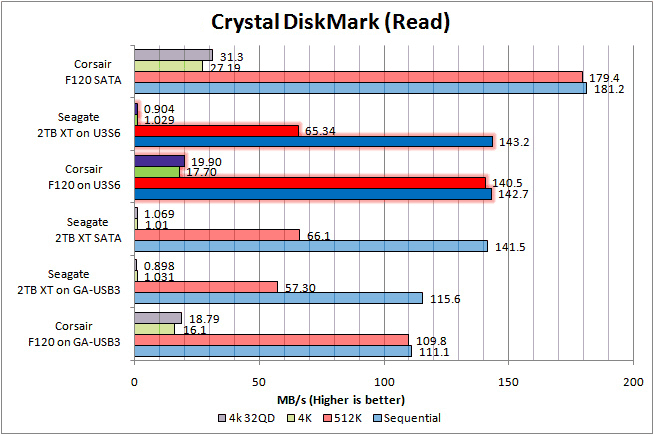 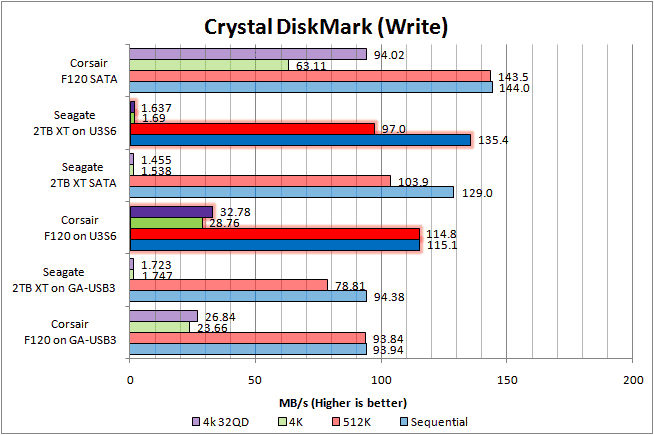 While the Seagate running on the Asus U3S6 did manage to eek past the SATA results one time, I consider this more an aberration than a true representation. If you remove sequential speed from the equation, as I have already looked in depth at that, what you see is a mild to moderate performance hit for the U3S6 and a moderate performance hit for the Gigabyte. So far, this is a clean sweep for the U3S6. 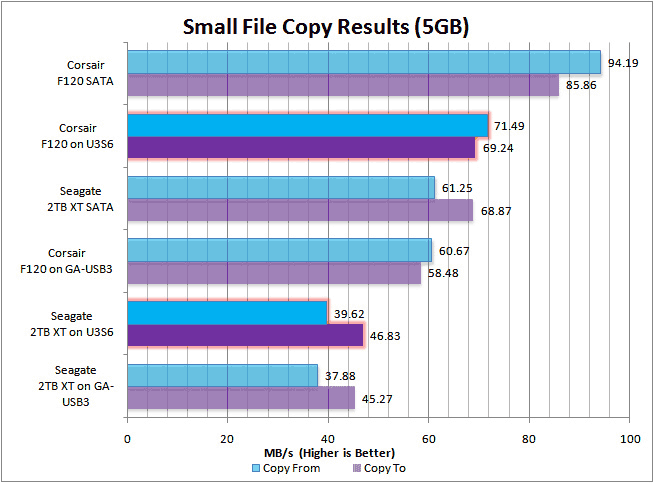 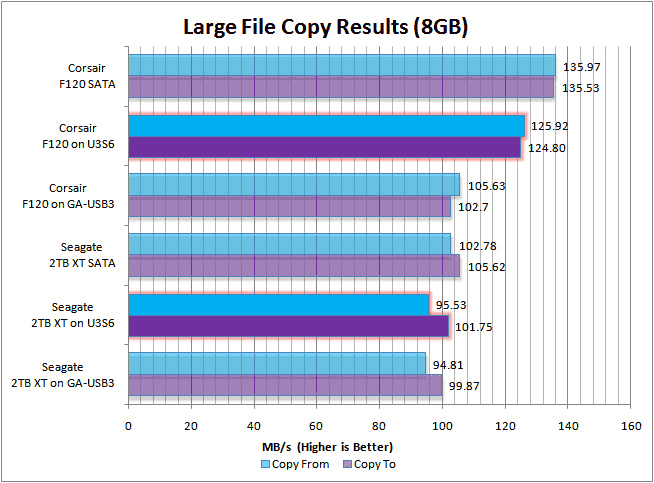 This really does seal the deal as both synthetic and real-world tests have consistently shown the Asus U3S6 to be a faster interface card. The fact that the card comes with SATA ports is at this point just icing on the cake.

For this test, an Asus P7P55D Premium with Intel 530 CPU and 4GB of ram was used. All review items are plugged into the secondary PCI-E gen 2 x16 slot (running in x8 mode). In the first run, the integrated SATA 6Gb/s port was used and in the second run, the U3S6 was used. 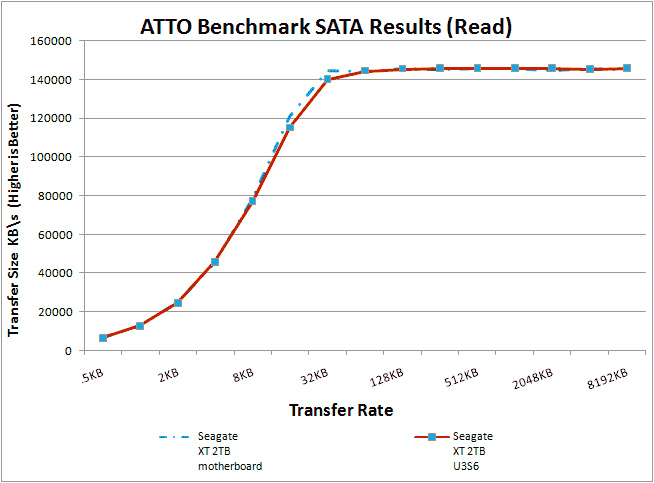 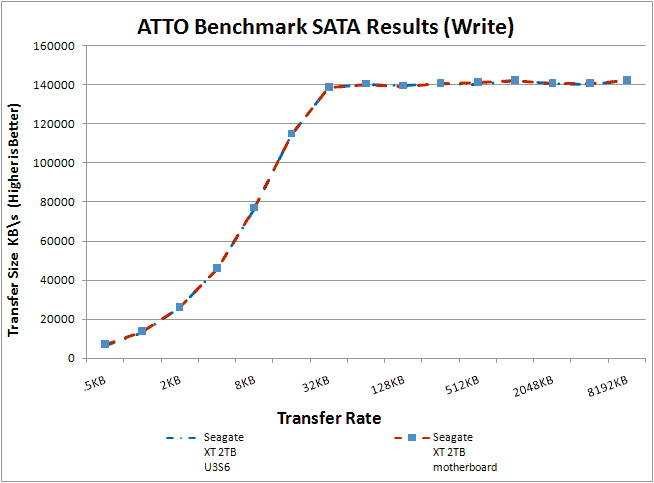 We really are not going to include any more numbers than this as the sad fact of the matter is the Asus U3S6 does not like to have any SATA drives attached during POST. I tried the card on a Gigabyte P35 UD4, Gigabyte EP45 Extreme, and even a Gigabyte X58 UD3 motherboard; all would fail to POST if a drive was attached to both the card and the motherboard integrated SATA ports (either Intel or integrated JMicron ports). You literally have to either hot-plug a drive onto it after the system has booted up or only have drives attached to the card during POST. No other combination would work. Sacrificing all your motherboard’s SATA 2 ports to gain a mere two SATA 6Gb/s is a less than optimal solution. With that being said, the performance curve of a Seagate XT 2TB drive is basically the same on an Asus P7P55D as it is on the U3S6. If you do have a motherboard on the Asus approved list, the Asus card is a quick easy upgrade path with no downside; for everyone else, I would look elsewhere.

The ease of installation and performance the Asus U3S6 combo card offers is going to be very tempting to many users with newer systems looking to get USB 3.0 capabilities. Why spend all that time and effort on upgrading a nearly new motherboard when doing so won’t really gain you anything in terms of USB 3.0 performance or number of ports? With that being said, if you are also looking for SATA 6 capabilities, this card is not an optimal solution unless your existing motherboard is on the extremely short Asus-approved motherboard list.

When compared to similarly priced x1 cards the results speak for themselves and make one heck of an argument in the Asus’s favor. In theory, there should be no single USB 3.0 device out there that can saturate the 500MB/s limitation of the x1 PCI-E cards, but as I saw, my solid-state drive did just that on our GA-USB3 card. While less than perfect if you are a power user, or even just someone wanting to future proof their system, I can say this card was a better solution – a product that is more future proof from its x4 interface. To us, the question becomes why spend the same amount of money on a PCI-E x1 card when an x4 will give you and your system more room to grow and maybe even more performance now? As long as you treat this daughter card as a USB 3.0-only card, or are lucky enough to have one of the handfuls of Asus-approved motherboards, the U3S6 SATA 6 & USB 3.0 Card is highly recommended.