The dubbing process is easy and fairly bullet proof, but only fair audio quality and inconsistent software features make the USB assette archiver mediocre at best.

Once upon a time in a childhood far, far away I owned a vast collection of cassette tapes. I had all the big names: Abba, Jewel, The New Kids On The Block… Oh, to let those old tracks live again as MP3’s. Of course, I could always spend four bucks and buy a cable to plug an old stereo into my computer’s sound card, but that would be so… Analogue. With the ION Tape Express, you are supposed to be able to convert your old tunes into pristine digital MP3’s with a minimum amount of hassle. With unit in hand and tapes at the ready it was time to find out if the unit actually would live up to its billing

At first glance, the Tape Express looks like something that might have cost ten or fifteen dollars at your local discount store. The casing is a very thin molded plastic with some chrome highlights and buttons, and a poorly placed eject button/slider that lets the front of the player pop open to accept a tape. These cosmetic issues aside, the unit looks like your typical 1980’s vintage compact cassette player with the exception of the mini-USB port on the side. 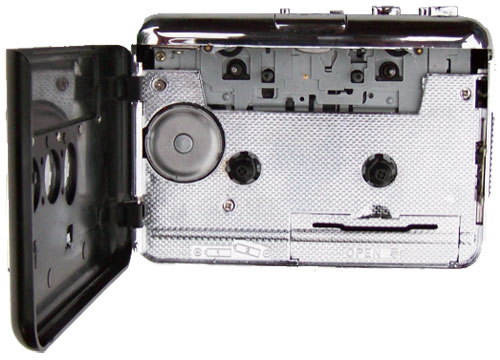 The general feel and appearance of the unit seems to scream “fragile”, but in testing I found it to be a little more durable than I had expected. That being said, the included headphones are pretty cheap, and are the very uncomfortable around the back of the head type. For people with larger heads (like me) they just don’t work well, but luckily we are not buying the unit on the basis of the headphones. 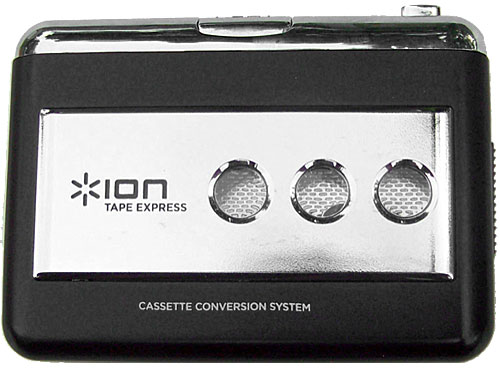 Setting up the unit is fairly straight forward. The unit comes with a hybrid CD with software for both the Mac and the PC. Install the appropriate recording application on your computer, start it up, and then plug the player in via the included USB cable. Although the unit can run on two double A batteries none are required when using the unit over a USB connection. On both platforms the software immediately recognized that the unit was connected and after clicking through a few settings screens I was ready to go.

On the Windows side of things, the EZ Vinyl Tape Converter software provides adjustments for chrome or normal tapes and a slider that allows you to boost or lower the gain depending on the music being recorded. Another check box on the software tells it to split the recording into tracks, a huge mark in the plus column of this review, removing the need for me to sit next to the PC for an hour stopping and restarting the process after each individual track. It should be noted though that on the Mac side of things there is no such option, so Mac users break up the tracks manually by clicking a button in between each song. This rather spartan amount of customization and control has both its good and bad points, as it is easy for newbies to get started using the device but more advanced users will be left wishing they had a little more flexibility. 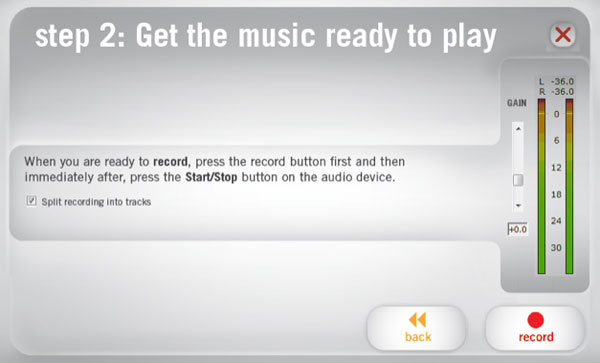 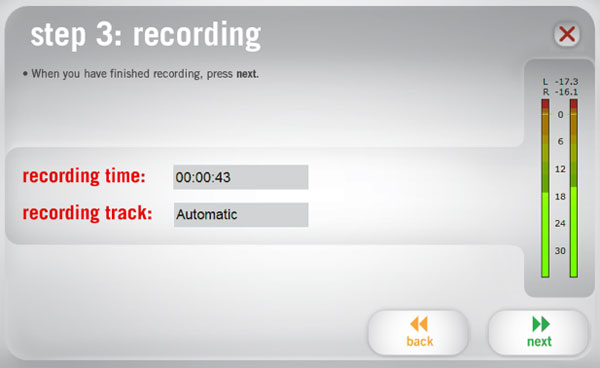 Not wanting to risk my Kenny G classics I started out with an old Jewel cassette that I found in my wife’s sock drawer. I popped in the tape and let it run for a bit, watching the levels and adjusting the gain so that it began peaking in the right place on the meters. Once everything was set up and adjusted properly, I pressed play on the ION Tape Express, hit the Record button, and watched for a bit. After one song finished I was expecting to see the screen make note of the fact it had moved on to the second “track.” Instead it appears that the software records the entire tape then analyzes it and slices it up after the recording process has finished. The problem with this? If you make a mistake during the import process all of the tracks are lost and you have to restart from the beginning. It would be much nicer if the product would slice the tracks up on the fly and save them with temporary file names instead of waiting until the end of the import process.

When I returned an hour later the recording session was completed. The tape unit has an automatic reverse feature that switches direction at the end of the first side, so I was happy to see that it had apparently recorded (and correctly separated) all 14 tracks from the two sides of the tape. I typed in the artist and track title information into a form on the screen for each of the tracks and hit next, which then opened up iTunes and began to convert the recorded audio into MP3 format. 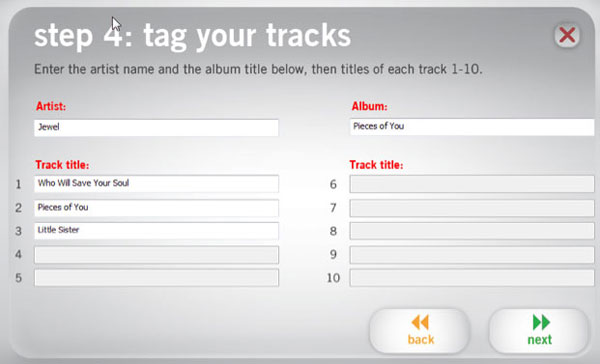 On the Windows side of things, the program forces iTunes to import the audio as 160kbps/44.1kHz MP3 files. Regardless of how you have set your iTunes preferences, you will always record at that same bitrate and into the same format. Not so on the Mac side, where I discovered that iTunes imports and converts the files using the preferences that you have already set, meaning that you can record in as high or low a bitrate and in whatever format that iTunes allows you to use.

Once the tracks were into iTunes I went in and had a listen (listen to the MP3 sample on the right). Overall they were pretty good dubs, although the tone seems a little washed out and tinny at times. These were fifteen year old tapes though, so I went on and did some more ripping using other tapes both commercially produced and also those created by me back in the day. What I discovered was that the commercially produced tapes did pretty well with track detection and overall sound quality, but my non-commercial tapes, including a live choral concert that was mastered by a professional recording company failed miserably at track detection. In those cases, the tracks wound up getting chopped into tiny segments when the music was too soft or at times not getting chopped at all resulting in one giant, 45 minute long MP3 file. Also, while the software did a good job of removing dead space from the end of each side of the tape they did not remove the dead space from the beginning of the side, leaving a ten to nineteen second chunk of silence at the beginning of those tracks. Check out an audio sample below.

There are no controls provided in the software or on the unit itself to apply noise reduction or any kind of equalization. The unit however does a decent job of reducing the background hiss (listen to the MP3 sample below), but it is more noticeable when using normal mode as opposed to chrome mode.

Since it had been a while since these tapes had seen the light of day, I wanted to try to compare the sound quality of the tape playback. Since I had long since gotten rid of my old tape based stereo, I had to get a little creative. I put fresh batteries in the unit and sat in the garage in my late model Taurus. First I played the tape through the car’s built in cassette player and followed it up by plugging the Tape Express into the car’s audio port that I use with the headphone jack on my iPod. To my fairly well trained ear, the audio from the ION Tape Express seemed a little hollow compared to when the same song was played on the much fuller sounding car stereo. You can probably attribute a little of this to the fact that the car has built in equalizer and noise reduction where the ION Tape Express has none. It was also noticed that when running on batteries (even new, fresh batteries), the unit seems to not operate as well. Tape speed issues almost made the tape get wound up on the rollers on several occasions, but only when running on batteries and not when connected via USB.

or all of the minor annoyances mentioned previously, the ION Tape Express does the job it is intended to do with a minimum of effort from the operator. The biggest problems I had with the unit had to do with audio quality and a rather finicky tape reverse mechanism that wanted to switch directions far too easily on some tapes. Honestly though, the same or better results could be accomplished with a $5 headphone cable and a freeware audio recorder program. The ION Tape Express does make the process of archiving old audio tapes much less painful though, and for the vast majority of people it would be adequate. Those that consider themselves audiophiles however should look for a more acoustically accurate option with a built in equalizer and noise reduction.