Do I Really Need One?

This category isn’t new by any means yet these dual-headed drives featured here have improved significantly over first-generation products on all fronts.  Granted, there are quite a few usage restrictions, but they do come in handy in situations where all other options are exhausted.  To the manufacturers’ credit, these limits are largely imposed by the iOS platform rather than the drives themselves.

At the end of the day, you will find these drives to be quite useful whether you need to access large-sized media files (especially non-Apple friendly ones) or to make crucial media backups where Internet connection might be costly, too slow, or simply unavailable.

Things That You Need to Know

The iKlips Duo came to fruition as the result of Adam Elements’ successful crowdfunding campaign on Indiegogo.  It is the largest (in terms of physical size) among all the drives featured in this round-up.  The made-for-iOS flash drive with an aluminum enclosure offers robust build quality.  Yet you will need the accompanying silicone sleeve to keep both Lightning and USB 3.1 connectors protected.  The sleeve itself is also affixed to a keychain loop. Adam Elements’ iKlips app – currently at version 4 – has received numerous updates since its initial release.  Our overall experience with iOS app has been positive.  Its interface feels polished and generally well thought out.  There are different ways you can save pictures as well as video from your iPhone into iKlips.  That includes copying pictures selectively through the iOS Share Sheet from inside Camera Roll; importing an entire album from iKlips app, and backing up everything through a one-click process.

The app conveniently includes a feature that lets you download video (up to 720p) directly into the iKlips from YouTube and Vimeo.  This feature is handy when you want to watch (and re-watch) some lengthy video without cluttering up your iPhone and wasting even more precious cellular data bandwidth.  iKlips app’s built-in media player is a mixed bag.  On the plus side, it handles MKV containing different audio and video codecs remarkably well.  We didn’t experience any hiccups during our 10GB video playback.

One major drawback with the music player is its inability to organize songs based on their ID3 tags.  All our MP3s and AACs were listed simply as files.  Nevertheless, the player did handle all our songs just fine; it could also continue playback in the background.

Adam Elements’ iKlips Duo comes in 32, 64, 128 and 256GB with each version differentiated from the others by its color.

The second iteration of iXpand is miles better than its predecessor.  Despite the fact that the drive takes a similar design approach to that of Leef’s iBridge, the much-improved iXpand runs faster and stays unobtrusive during daily use.  Dropping the need to recharge the drive’s built-in battery is also a big step up in terms of usability. 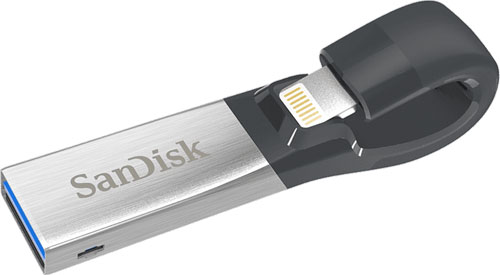 Plugging in iXpand V2 into our iPhone’s Lightning port pops up a message saying if we wanted to launch its associated app.  Once inside the app, the first thing we noticed was that a lot of thought went into the features for iOS users who don’t rely on iCloud (or even iTunes) for data syncing.  They include everything from different backup options to multimedia file support.

Incremental backup for photos and contacts can be set to automatically begin as soon as iXpand is connected.  However, waiting for the drive to complete the first full backup is a test of your patience if you have a sizable photo library.  Photos are then logically organized in subfolders based on the year and month the files are created. The app can also download pictures and videos into iXpand directly from social media sites from the likes of Facebook and Instagram.  Once backup is complete, the files are saved into folders of the same name as the album titles originally given on Facebook.

Sandisk gets bonus points for supporting iOS Share Sheet extension so you can send files over AirDrop and to other apps from iXpand.  Likewise, native iOS apps (e.g. Photos) can transfer media or documents directly to iXpand drive with the same iOS’ Share Sheet extension. Also worth noting is the data transfer rate between iOS device and the drive.  According to our tests, the Sandisk was the fastest (29MB/s to iPhone; 13.5MB/s to iXpand) when compared to Leef’s iBridge 3 and ADATA’s AI920.  These results were obtained through benchmarks on our iPhone 6.  Expect better performance when these drives are paired with USB 3.0-equipped iPhone 7 and the second generation of iPad Pro.

As for the audio player, the Sandisk app was able to build a library from the songs already in the Apple’s Music app as well as the MP3s and AACs on our iXpand.  The load time was slightly longer than expected and the player also couldn’t read any of the tags and album art embedded in our FLAC lossless files. Our full HD MKVs encoded with multiple audio streams as well as subtitles were handled beautifully.  The app even allowed you to continue playback where you left off previously.  There’s one caveat. DTS audio is not on the list of supported audio.  A workaround is to get Infuse Pro.  It’s is a full-featured multimedia player for iOS that works with iXpand natively via Sandisk’s API.  When we say full-featured, it means virtually every known media type and codec are supported. 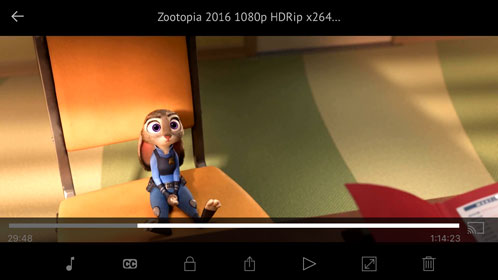 Sandisk’s iXpand V2 is available from 16GB to 256GB but as far as we know, only the 128GB and 256GB variant come with support for exFAT.

Riding the wave of iPhone worldwide popularity, MFi USB sticks are popping up left and right.  They promise a seamless file syncing experience for iOS users who prefer keeping things as simple and straightforward as possible.

In the end, what we found out Leef iBridge 3 and Sandisk iXpand V2 are the most versatile of the four MFi drives tested.  They benefit from a robust media player and feature-packed iOS app.  The Adam Elements’ iKlips Duo is also a decent choice for users who rely on the drives to backup photos primarily.  Both Sandisk and Adam Elements – according to our benchmark carried out on iPhone X – delivered the best Lightning performance in this round-up.  Yet the numbers were more comparable to that of a USB 2.0 flash drive.

Having said that, Kingston has its own merits – being the most durable as well as having a polished user interface.  It might want to throw in a few extra app features to keep up with the competition.  Lastly, there’s nothing really wrong with ADATA AI920’s hardware.  It’s just that their app feels like a work in progress and desperately needs a major overhaul.