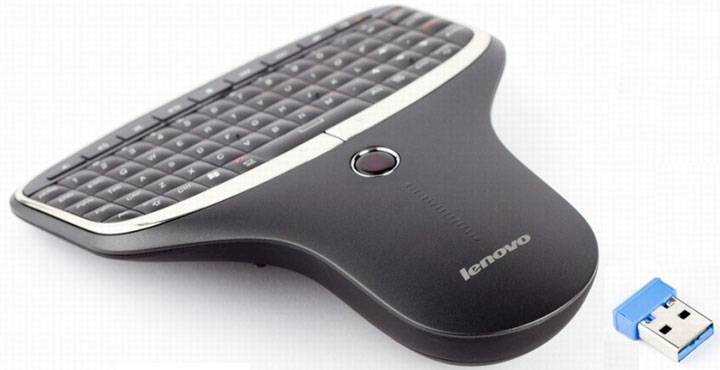 Finding the right Home Theater PC remote can be an exercise in frustration. For the last three years, I’ve been searching for the right combination of control, wireless range, battery life, backlighting, and price. Even as a reviewer, this is much harder than you’d think it’d be. Enter Lenovo with their second generation HTPC controller, the N5902 Multimedia Remote with Keyboard. There are a ton of improvements to be had over the older N5901 including backlighting, but how does it stack up overall? Click onward to our in-depth review to find out!

I must say that I enjoy the new graphite finish of the N5902 much more than the N5901’s glossy black that seemed to latch on to fingerprints. The underside is also matte but replaces the topside’s luster with a duller, lightly rubberized grip that does well for minimalist utility. Rounding up the visual splendor of the remote is the new chrome ring surrounding the keyboard, which also doubles as the left and right mouse buttons just underneath the space bar. 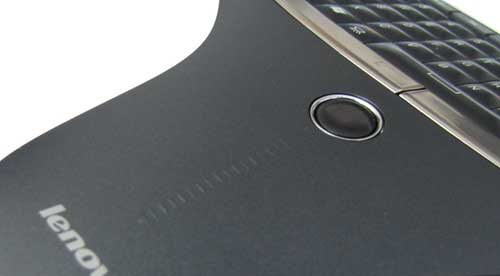 Another noteworthy change from the N5901 is that the trackball mouse has been replaced with “optical finger navigation”, but we’re going to call it an optical trackpad. Think of it as if you were dragging your thumb over the underside of a traditional optical mouse, only with a smoother feel and none of the inverted pointing or bright red lighting. Lenovo probably made the switch from a trackball to a trackpad in the name of solid-state reliability, since fingers in a living room will invariably be covered with Cheeto dust. Remember Apple’s not-so-Mighty Mouse? Lesson learned.

The center part of the N5902’s trackpad clicks down for a left click for more efficient one-handed mousing, and this is made even easier by the addition of a touch-sensitive vertical scroll bar just below the trackpad. A dedicated middle click is missing, but quite honestly it isn’t needed since Ctrl+Clicking has the same effect when web browsing. 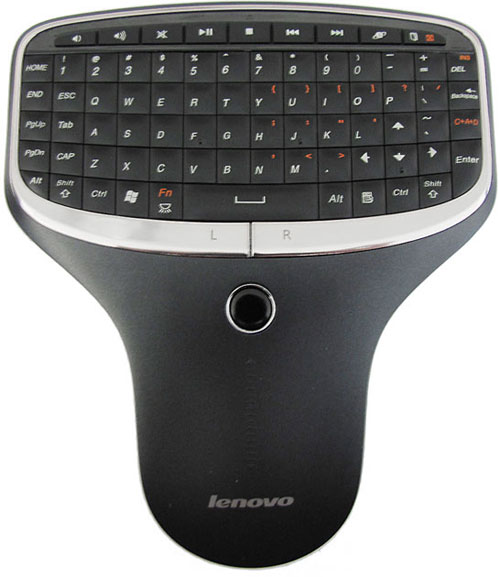 The keyboard layout has also seen some improvements over the older model, now backlit and sporting a total of 75 keys. Though there are some redundancies like the second Alt and Shift keys, the other changes are generally welcome. Dedicated Home and End buttons come in handy, as does the Alt-Tab button at the top right corner that doubles as Alt-F4 and a button that immediately launches your default web browser. Notably missing from this assortment is a “Green Button”, which Windows uses to launch Media Center. The Media Center application can still be called on by pressing Windows + Alt + Enter, but that’s a bit awkward to press on a small keyboard. But by far the single most important change to the keyboard is a raised nub on the down arrow for quick navigation by feel only, similar to the nubs on F and J for touch typing.

In the Living Room

My first reaction when switching to the Lenovo N5902 was just how reliable the 2.4GHz wireless signal is. I was able to type perfect sentences with no dropped keystrokes from a solid 13 feet away on the couch. Mind you, this is with the receiver plugged into the back of my large steel computer chassis on the floor, next to my Wireless G router. Contrast this to the Rii Mini Wireless Keyboard, where I need to use a couple of unsightly USB extension cords to place the receiver a fair distance away from all of the electronics. I was also unable to find any “death grips” that stifle the wireless signal like there are on the iPhone 4 or Rii keyboard. Nice job, Lenovo. 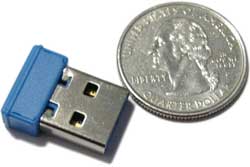 Sadly, Lenovo’s optical trackpad isn’t much better than the Rii’s capacitive trackpad. The speed of mousing is terribly hampered by the extremely limited 500dpi resolution, not to mention the relatively narrow width of a thumb on a sensorless than half an inch wide. Horizontal mouse movements are an absolute pain on a 1080p widescreen display, even with the mouse sensitivity cranked all the way up. Also, the mouse can also seem somewhat erratic with smaller movements whenever the thumb is repositioned due to liftoff tracking by the optical sensor.

This begs the question, why didn’t Lenovo opt to use a standard capacitive trackpad? There’s plenty of room for one to be implemented, even with the independent scrolling bar. If size and aesthetics are to blame, it still doesn’t explain why Lenovo couldn’t just carry over the TrackPoint stick from their ThinkPad line of notebooks. At least those have decent accuracy and speed.

Navigating menus in Media Center, Boxee, and Hulu Desktop was mostly simple, thanks in part to the Inverted-T arrow keys that could quickly be identified in the dark by the raised nub. I can see the arrows being a stretch for lefties since they’re located on the right edge of the keyboard, but this should only affect those with smaller hands. The Escape and Backspace buttons that Boxee and Media Center use as back buttons, however, were slightly harder to locate given their placement away from the outer corners of the keyboard. The dedicated media keys are a godsend for Media Center, but I’m finding it necessary to look down to press them since unlike traditional infrared remotes, they lack any tactile feel – the play button feels exactly the same as the stop button. 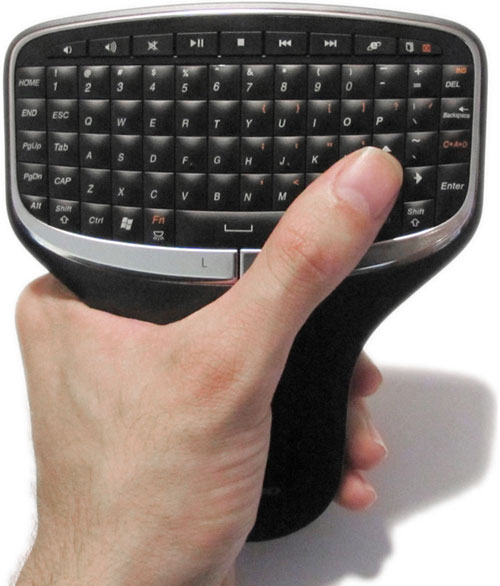 Backlighting is rather dim and uneven when compared to the of Rii keyboard, but still sufficient for typing in a dark room. With the power switch in Backlight mode, the lights will stay on for about 5 seconds whenever a key is pressed, but they also can be activated before typing by pressing the Function key to the left of the spacebar.

As far as battery life is concerned, Lenovo claims their remote can be used for up to three months on a single pair of AA batteries. I’ll be updating this review in the future as soon as my batteries die to see just how accurate that is. There doesn’t appear to be any low-power sleep mode with the N5902 like there is with the Rii, which is a great convenience but at the cost of having to remember to turn off the remote when not in use. I’m bad at that. Of course, rechargeable batteries can be used instead of alkalines, but you’ll need to invest in a separate battery charger since the N5902 lacks a charging mechanism. As an added nicety, inside the battery compartment is a space to stow the nano receiver when not in use, perfect for traveling with an HTPC laptop. 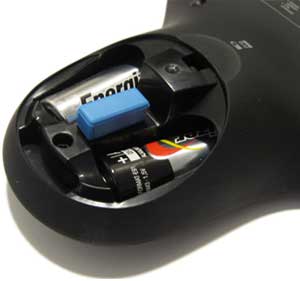 Overall I’m fairly content with using Lenovo’s second-generation Multimedia Remote with Keyboard as my only HTPC remote. Despite the obvious flaws with the limited sensitivity of the mouse, lack of a Green Button, and bland feel of the media keys, the N5902 still managed to earn a place in my living room thanks to its superior aesthetics, comfort, and reliable wireless signal. $70 is a bit much to ask for the remote given the mousing problems, however, so I’d suggest holding off on purchasing one until good sale crops up.