With its bevy of advanced features, the wireless keyboard is sure to make nearly anyone please with their latest purchase. The only caveat is to be truly happy with this keyboard you will need to adjust to its unique key layout. 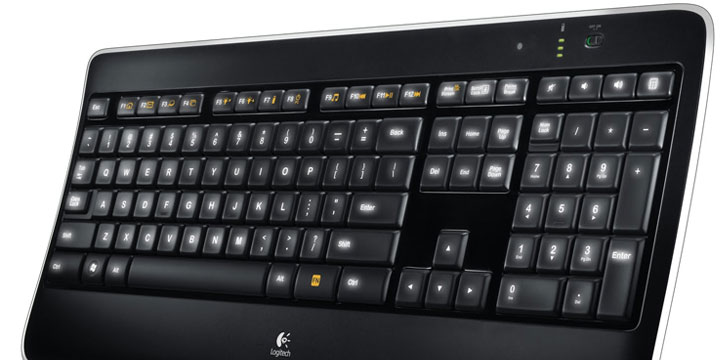 Not everyone wants an old-fashioned wired keyboard, yet not everyone wants a gaming keyboard either. For this growing niche of consumers desiring something different without being too different, Logitech created their Illuminated keyboard which offers a bevy of features with an ultra-thin style that is neither too conservative nor too radical. Now the company is back with a wireless version. Does the Logitech K800 live up to expectations? Read on for my full review.

With its combination of white, black, and clear color scheme, the K800 certainly is one sexy-looking keyboard. This was very unexpected as I am usually not a fan of multicolored keyboards and prefer a monochrome look. My reason for this is most manufacturers do not know how to properly implant a multi-color design; with the end result looking like something between a clown keyboard and a Jackson Pollack painting.

Luckily, this keyboard manages to pull it off and in fact, if it wasn’t for the Logitech logo on the front near the ultra-small wrist rest I would have sworn this was something Apple had designed. It really does have that look to it.  With dimensions basically the same as the Illuminated keyboard it is based on, the K800 manages to feel both larger and smaller than its dimensions. On the positive side of things, Logitech has managed to cram a heck of a lot of features into this keyboard without resorting to making it oversized like some other keyboards I have looked at.

Even better was the feel of these keys, which to put it mildly is second to none. The easiest way I can describe them is as if each and everyone has been “pre-worn” as there are no sharp edges. They feel much like a used bar of soap with rounded corners and a small indent in the center of each which gently guides your fingers into position. Sadly, while the keys themselves are amazing, the mechanics of actually pressing them is also unique. Pressing a key on the K800 really is a unique feeling, one that some may describe as “mushy” and even if you are more forging than that it will take a while to get used to this unique feel. I prefer to think of them as gentle rather than mushy but I can see the other side of that coin.

Honestly, you are going to fall into one of two categories with these keys. You literally are going to either “love them” or “hate them” and I doubt there will be many people ending up with a neutral feeling on the matter. With that being said after using it for a week I can honestly say that I like them as I experienced less finger fatigue after extended usage. These keys are downright gentle on the fingers and take noticeably less force to accurately and consistently press them. I did not need to “slam” the keys and was in fact able to scale back the amount of force I needed to accurately (and reliably) get a keypress to such a low level my hands nearly flew over the keys. This made writing up multi-thousand reviews even faster and easier than ever before.

It is funny but for many keyboards, the superb feel would be the star of their show; yet Logitech did not stop there and has included three pretty nifty features. The minor of these is the adjustable backlighting. Backlighting, even adjustable backlighting, is certainly not new and has been featured on numerous keyboards throughout the years, but this is the first wireless keyboard I know of that boasts this feature. What I am certain makes the K800 keyboard special is it is one of the few which is smart enough to know when you are using the keyboard and when you are not… it turns off the backlighting. This wouldn’t be all that important if it weren’t for the fact that this keyboard is wireless (in testing it was accurate to distances of a bit better than 28 feet) and thus uses batteries. 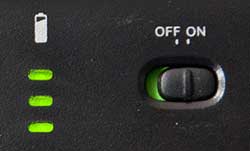 During testing, I found that at the moderate intensity setting of 25% that even after a week of heavy use the battery showed as one bar full, which while on the low end of reasonable is pretty decent for an illuminated keyboard. The ability to accurately predict when you will need to plug the K800 is another little design tweak I liked. Where this keyboard has an integrated 3 bar battery meter you know when you need to recharge it before it goes dead on you. Also noteworthy is the fact that Logitech has opted for bog-standard 2000mAh AA batteries. I loath integrated batteries as even the best ones die on you before anything else does; so having the ability (via the removal of one screw and plastic cap) of swapping out the batteries for new ones is certainly impressive. Sadly, once again Logitech has opted for mediocre 2000mAh batteries. I truly wish they would stop doing this and go for 3000mAh or better as the higher the density the longer it could go between charges.

To be honest, this is neither here nor there as you can easily and cheaply swap out the batteries for higher-density ones. One puzzling issue is that the USB charging cable is not a data cable. So, even when plugged in, you need to need that wireless transceiver. Would have making the USB cable dual-purpose been that hard? When it comes to charging times, they are a little on the long side and Logitech states it can take upwards of six hours to recharge. This is simply too long a period of time. The G700 mouse which uses the exact same number and density batteries can do it in 33% less time; so there is no real good reason this keyboard does not boast similar charging times.

For testing, I have not included my typical two-part approach as this keyboard is not sold nor marketed as a gaming keyboard. As such, including gaming results would have not been fair to the K800. Instead of doing two sections, I have instead focused in the actual real-world usage of this keyboard. To be precise, I have tripled the amount of time I spent testing this keyboard in “real world” scenarios so as to get an even more accurate feel for its capabilities. To this end, a combination of Word, Excel, Photoshop, and Firefox web surfing over a 7-day time frame, for over 24 hours worth of usage, will help replicate a more “mundane” real-world scenario.

I must admit for the first couple of days, I really did not like the K800. The key layout does feel cramped and the keys felt downright mushy to me; which in turn caused my typing speed and accuracy to take a dive. With that being said, about the day 3 mark I started to “get” this keyboard and things started to improve. By the fifth day, I was back to where I usually am and things were only getting better. After a week of usage, my accuracy actually became better and my speed was also slightly improved. I really did find myself reaching more and more for this keyboard rather than opting for one of the myriads of other options I have.

With that being said the experience was and still is not a perfect experience. I dislike small backspace keys and this one reminds me a lot of a laptop’s keyboard’s backspace. In fact, the entire keyboard layout reminds me a lot of my Asus 15″ keyboard. Luckily, the feel of these keys is far superior to what a mere laptop boasts.

On the positive side, the dual-purpose function keys and their aptly yellow labeled “FN” key were perfectly situated so that it was both easy to access and yet near impossible to accidentally press. I also liked the fact that no software needed to be installed to use this keyboard. This coupled with its ultra-small Unifying wireless transceiver meant I could quickly and easily pick the K800 keyboard, install it onto a different system and be up and running in no time at all. At the same time, other Unifying-compliant input devices such as Wireless Touchpad, Anywhere MX and M570 trackball can also pair with the same wireless USB dongle.

I can honestly say this keyboard is not right for everyone. It has some great and killer features but not everything is perfect. In fact, some of these features can be considered quirky and maybe even negative by some. The main job of any keyboard is to appeal to as wide an audience as possible and it is here that the Logitech K800 fails.

What may be the real deal-breaker are the keys themselves. I came to love their feel and comfort, but it did take a while to warm up to them. I can easily see where some people will never like the feel or layout of the keys. With an MSRP of $99.99, I strongly urge you to try one out at a computer store before buying.