This is everything the Apple Magic mouse failed to be; it offers the best of both a mouse and touchpad with almost none of the negatives of either. If you can live with its slight learning curve and slippery body, it will make your Office-Fu more effective. 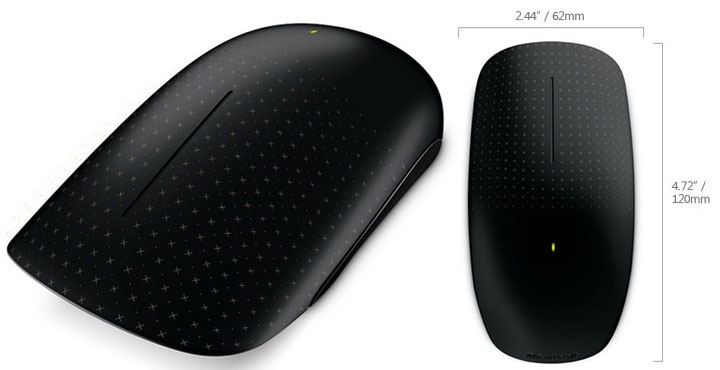 The original Arc certainly was innovative and groundbreaking, but the flipside to making such a great notebook mouse is what you do for an encore. It seems Microsoft is not satisfied with just making a minor tweak to the design and calling it Arc 2.0. Rather, Redmond has created something completely new. The new creation is not only ultra portable, but it also comes with a touch-sensitive wheel. Does this new MS Arc Touch have what it takes to be the worthy successor to the original Arc? Read on to find out.

With its almost over-exaggerated – yet gentle – sloped form and a rather low palm arch, the Touch Mouse does not look all that special at first glance. In fact, it looks pretty much like another ambidextrous mouse, albeit with unusual ergonomics. This, however, is a classic example of first impressions being wildly off base. The first clue that MS Touch is not your typical mouse is the almost flat and rather long slope to the button area.

The second hint is the fact that there are no obvious buttons to be found on this mouse anywhere. Also, there is not even a scroll wheel. The only thing which graces the black exterior shell of the Touch Mouse is a grid pattern of “X’s” with small dots in between them and a small recessed line where a wheel should be. When you add all these up, what you get is a decidedly odd-looking mouse.

There is no scroll wheel nor buttons because the front half of the MS Touch Mouse is not made up of your typical plastic. The front half of this mouse (delineated by the X grid pattern) is the integrated touch-sensitive area. This makes the visual acquisition of the “touchpad” extremely easy. Helping you know where you are, in relation to the rest of the mouse, is the grid pattern area. This textured section has a stippled – almost Braille – pattern to it that is only barely perceptible. This combination makes swiping with one, two, or even three fingers easy.

Having said that, this mouse can recognize two- to three-finger gestures. Depending not only on the direction you move your finger(s) over it, but the number of fingers you use determines the command it sends on to the operating system. For example, three fingers drawn straight down towards you equals a minimize all command that brings up your desktop; swiping two fingers to the left or right “snaps” the active window to either 50% left of right coverage (a real boon for multi-screen setups!).

You can still send the normal left and right mouse button commands by pressing down on where they should be. The entire front half of the Touch Mouse’s shell will rock and you will hear a switch is activated. In other words, you need not rely on the touch area to get work done; the standard mouse features are all there, but they are just hidden from plain view. The only issue with the design of MS Touch Mouse is the glossy smooth plastic that dominates the two side grip panels. This is going to make gripping this mouse a tad more difficult than it otherwise would be. 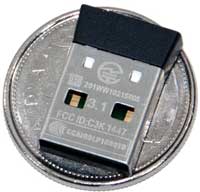 The underside of the Touch Mouse is done in a pearl white color scheme that contrasts nicely with the blacktop. The four main features include the recessed storage area for the nano transceiver (about the size of a quarter); the sensor suite itself; the power switch; and the battery compartment. The small storage slot is spring-loaded, allowing easy removal of the USB transceiver. The battery compartment can hold two AA batteries which Microsoft claims should be good for up to six months.

As with most of Microsoft’s latest and greatest, the Touch Mouse relies upon the tried and true BluTrack sensor suite. This blue laser-based sensor allows the Touch Mouse to be used on nearly anything (except for glass or mirrored surfaces) without fear of tracking issues. The only disadvantage to this iteration is the fact that Touch only has a maximum sensitivity rating of 1000 DPI. This should be good enough for most people in a workplace setting, but it still is lower than what many mice in the same price range can boast.

All in all, the MS Touch Mouse may have a few potential ergonomic and design issues but it does appear to have all the ingredients needed for an innovative mouse. Let’s try it out and see if it can live up to expectations.

While the MS Touch design certainly is promising, I was very leery of this mouse. Its odd slopping design coupled with ultra-slick plastic really did not look all that impressive to me. But within moments after I installed the software, I was able to perform tasks that while possible with a normal mouse, were ten times quicker with the MS Touch Mouse. Snapping windows to the right or left, maximizing and minimizing all were simply a multi-finger motion away. 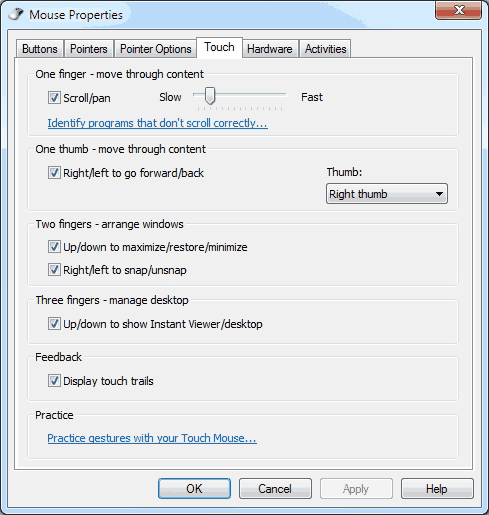 Where I’m a power user with an average of 12 or more programs open at a time, being able to use three fingers to bring up all our active windows and then choose which one I need can noticeably save my time. Using the MS Touch Mouse really does feel like for the first time mastering the full capabilities of Windows 7’s extra features.

In my experience, there were a couple of things that made the learning curve a touch steeper than necessary. First of all, it was too easy to swipe over the mouse which resulted in some form of “touch actions” even when just gripping it. This did cause some minor annoyance, especially in FireFox since swiping my thumb to the left or right would take me backward or forward a page respectively. So, I had to retrain myself on how to initially grip the Touch Mouse so as to overcome this. The other minor issue was the vertical scroll which was sluggish in its responsiveness. I was surprised by this as the horizontal swipe was hyper-sensitive. This mouse really needs some tactile – and audible – feedback mechanism such as the one found in the Arc Touch as that would have helped a lot.

Overall, even though the abilities of this mouse are well thought out, the overall design and shape are not quite as perfect. I did come to learn to love the long slope of the finger buttons and I came to respect the multi-touch capabilities of this mouse, but those side panels made from smooth plastic leave a lot to be desired. If you use a palm grip this issue does not apply to you as it is very comfortable in a palm grip. However, if you hold your mouse in a finger grip those slick plastic sides are less than optimal. I’ve previously have encountered many mouse designs that make this mistake and always have some high friction tape on hand. Two small strips later and this mouse may not be as good as it could be if MS used rubberized side grips, but it was very comfortable and secure in my grip.

When all is said and done, MS Touch Mouse is perhaps the most innovative mouse I have ever used. Microsoft has been able to effectively combine two dissimilar products into one. Honestly, up until I started actually using it, the idea of making a mouse that is also touch-sensitive seems outlandish, yet in no time the capabilities this mouse affords you will win you over.

Granted, the MS Touch is not perfect. While the touchpad upper portion impresses, the bottom mouse portion is not. To be blunt, this mouse is very slick and needs rubber grips on both sides. My thumb and pinky fingers really did have a tendency to slip out of position instead of moving the mouse unless it was griped very tightly. (Luckily, one can easily improvise with a few small strips of high friction tape.) If you can live with this slipperiness – or modify it as I have done – then the MS Touch Mouse will likely satisfy your need; otherwise, you may wish to wait for the inevitable 2.0 version.