The USB DAC packs great sound quality and convenience into one small package. Even compared to premium sound cards like Asus Xonar D2X, the uDAC-2 can stand out in a class of its own

The uDAC-2 comes in a nicely packaged clear plastic box, but the accessory is very Spartan in nature only including the 1m long USB cable. The cable uses the standard USB-A connector found commonly on many printers, and should be very useful if one happens to misplace the original. The uDAC-2 itself though sets a new standard in the USB DAC market. 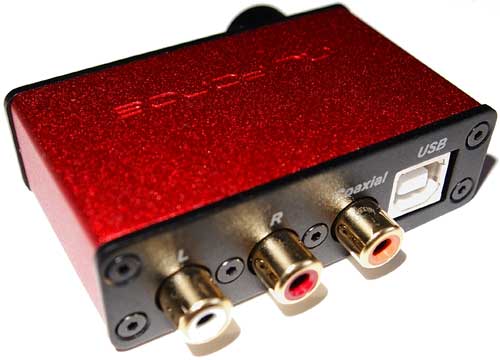 The shell of the unit is made with matte aluminum and does not flex or bend when put under pressure. Overall, the unit feels like a solid piece of work that will probably last longer than the earphones used. Data input comes in through the USB cable, and the uDAC-2 offers 3 outputs to suit one’s needs. In the front is the gain adjuster, as well as a 3.5mm jack for headphone use. The rear output consists of gold plated coaxial digital pass-through, and L/R analogue RCA output. What this means in a nutshell is that the uDAC-2 is a versatile piece of tech that could be hooked up either headphones, speakers, or home theatre receivers.

Like most USB devices, the uDAC-2 is very user friendly. As the device is connected, Windows automatically detects it. If there are more than one audio outputs available in the system, all one needs to do is set the S/PDIF uDAC-2 output as default. Since this device supports a maximum sampling rate of 96 kHz and bit-depth of 24, the default Windows settings needs to be changed under the uDAC-2 properties in order to get the most of the device. Without the change, some high bit-rate lossless files significantly lose their magic.

I used the Shure SRH840 Monitor Headphones, Fischer Audio DBA-02, and Razer Mako speakers in comparison with the Lenovo T61 notebook integrated sound card, and the ASUS Xonar D2X. The Shure SRH840 monitors are quite analytical in nature, and could pick out flaws in sound easily. In addition, these headphones require a good amplifier to sound their fullest. From the uDAC-2, the SRH840 sounded rich and blooming with detail from the very capable pre-amp installed. The highs came out with sparkling detail, and was just the right amount to prevent it from becoming sibilant. The mids also felt full and very smooth, which brings out fantastic vocals. Finally, the bass was excellent, with plenty of punch and good extension.

The DBA-02 is a pair of very transparent monitors, which again exposes weaknesses in the audio source. Since I was using FLAC audio through the tests, the uDAC-2 was the only factor in question. Like the Shures, the DBA-02 performed superbly with the uDAC-2. The soundstage and presentation was fantastic, and the details were rendered beautifully. However a problem with the uDAC-2 was that, while it sounded very musical, some finer details in the music was lost in exchange for smoothness. For example, while listening to Full Focus by Armin van Buuren, the buzz at the climax was able to be “felt” when using my Xonar D2X, but the uDAC-2 was so smooth that the distinctive details were merged together, and overall felt boring.

Comparing with Onboard Audio

The differences made here are definitely night and day. The Lenovo T61 laptop relies on a underpowered Analogue Devices DAC with minimal amplification. The SRH840, which requires a fair amount of amplification to sound at its best, failed to achieve listenable volumes without creating distortions. The same story goes with the CK10, which is a very sensitive pair of in-ear monitors, managed to pick up significant electronic noise, which was even noticeable with the music playing. Using the Mako speakers alleviated the problem significantly as it has its own amplifier. However, the sound produced was still very poor, with the bass lacking texture and extension, as well as having very dull treble and highs. Overall, it felt as if a veil was pulled over the sound, and I was listening to it under water.

Ringing in at about $180, the ASUS Xonar D2X is a very respectable sound card, even in the audiophile community. It sports Texas Instruments/Burr-Brown PCM1796 DACs, which are extremely good in this price range, and can output at 24bit/192 kHz, which is the same as the uDAC-2. In direct technical standpoint, the uDAC-2 does shy away as the DAC used is not as high of quality or reputable. However, in real life, the uDAC-2 comes very close to the quality offered by the D2X. While the D2X sacrifices no quality in presenting the sound to the fullest, the differences offered by the uDAC-2 and the previously mentioned fault is very negligible as it could be easily missed.

One thing that the uDAC-2 does do better than the D2X though, was the amplification. Despite the quality produced by the dedicated sound card, the operational amplifiers used by it was not enough to drive the SRH840s to their full capability. As a result, the 840s sounded much better with the uDAC-2 than the D2X.

Throughout this review, I struggled to find faults on the uDAC-2 that are relevant to the average consumer. I could nitpick from an audiophile point of view, but that would be pointless as this product is fantastic for anyone looking for a great way to liven up the sound coming from their computers. The build quality was superb, and the sound quality was even better. Cleverly, the people at NuForce have combined a very capable DAC with a potent pre-amp, all in a package about the size of a tic-tac box. While I struggle to find any downsides to this product, I would have to say that the details could be more expressed, and after prolonged use it does get a bit uncomfortably warm, although that subsides after a few minutes of idling.

While the uDAC-2 won’t replace any high end home theatre receivers, or any premium sound cards. It definitely raises the bar to a point where the law of diminishing returns kicks in for anything better. For most consumers out there, this is the perfect solution if the sound quality from computers are not enough. At $129, it’s a great long term investment that would keep on giving, and it’s not hard to give this my recommendation.

One response on “NuForce uDAC-2 Review”