The egg-shaped USB speakers look aesthetically pleasing, and sound fantastic until you hit mid-high volume, which happens to be around a mere 30%. More power is clearly needed.

Eggs. They’re nutritious, structurally sound, and are a necessary component for baking cookies. Eggs also make for great paradoxes such as the chicken and the egg, or how Olasonic’s egg-shaped speakers are simultaneously the best and worst USB-powered digital speakers I’ve ever had the pleasure and/or horror of listening to. Is your eyebrow raised yet? Good. An in-depth review awaits you below.

Egg lover that I am, I must admit it’s been incredibly hard to work at a computer with two jumbo-sized eggs in front of me. At 14cm tall and 11cm in diameter, the Olasonic TW-S7 speakers are almost as large as your average ostrich eggs, and per egg cost roughly the same as well. Seriously. I would like some breakfast now, please.

Olasonic claims to have a reason for this madness, however, in that the egg shape’s lack of parallel planes helps to reduce standing waves inside the speaker. This in turn increases the overall volume of the enclosure by eliminating the need for dampening insulation and allows for deeper bass response. The other key reasoning behind the egg shape is its inherent lack of sharp 90-degree edges, reducing diffraction loss. I’ll be the first to admit that I’m not an audiophile and was never all that good at physics, so much of this audio theory is above my level. That said, after a night’s worth of furious Googling I’m well enough convinced that there’s more to the egg shape than its chic aesthetic. 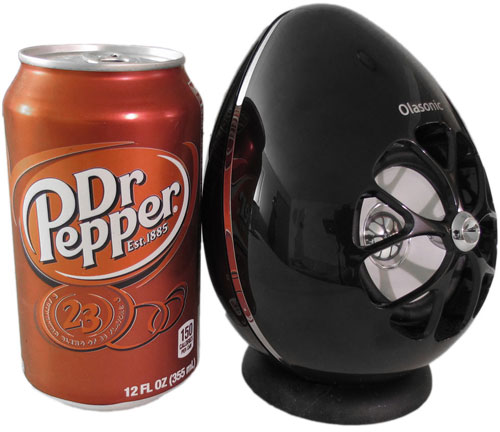 To keep the eggs from toppling over, Olasonic includes two silicone stands in the box that match the color of the speakers. Unfortunately, they don’t provide adequate friction so the speakers will frequently tilt backwards at high volume to the bass kicks. A quick application of some double-sided tape or putty will quickly address the issue, but I’m of the opinion that this shouldn’t be needed in the first place with a pair of $100 speakers. The silicone stands double in their purpose to provide insulation between the desk and speakers to kill unwanted vibrations. A small but pleasant amount of bass resonance is still allowed through, though, which I find helps raise the immersion level. 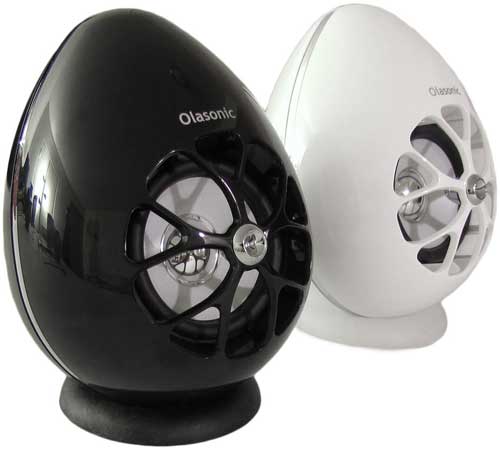 The stereo qualities of the TW-S7 speakers don’t end with the egg design. The plastic cones are relatively large for USB speakers at 60mm in diameter, and feature smooth rubber surrounds that also look to be of high quality. Center of the driver is a visually striking chromed dust cap, which is accompanied by an also-chromed diffuser that does well to distribute the high-frequency sounds so they’re not as directional. At the rear of the speaker, you’ll also notice a second 60mm opening for the passive radiator to give bass some extra punch. 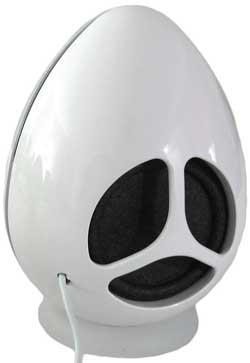 Of course, what really drives my attention to the Olasonic speakers is their USB interface. This is EverythingUSB.com after all. Whereas analog speakers connected to my computers’ onboard sound will all have soft hisses, pops and whines directly tied to my processor load, the USB interface on the Olasonic speakers delivers nothing but clean audio. Unfortunately, the TW-S7 lacks an auxiliary input to complement the USB interface, so don’t expect to be able to connect a smartphone or iPod to these speakers.

The single USB connection also serves as the sole source of power for the speakers, which poses a huge issue that I’ll get to later in the performance section of this review. Ordinarily, USB-powered speakers are designed as such for portability, able to be quickly plugged into a laptop on the go without the need to find two empty power outlets. It strikes me as odd then, that Olasonic would willingly limit themselves to USB’s 2.5 watts of power when their speakers aren’t even close to being portable. Simply put, ostrich eggs simply don’t pack well in a backpack. Even if you did have ample room in your bag, you still wouldn’t want to throw them into it since there’s no carrying case or sack to protect the delicate cones from being punctured or the high-gloss surface from being scratched.

One of the key features of the Olasonic TW-S7 is its so-called Super Charged Drive System, or SCDS. In layman’s terms, this is a fast capacitor that pools unused energy during periods of low output, dynamically releasing it during periods of high output. So rather than being limited to 2.5 watts of power as the USB 2.0 specification would dictate (500mA x 5V), the TW-S7 can reach a peak output of 10W under ideal conditions.

Of course, the SCDS system has its limits as it’s ultimately fed by the same 2.5W source as any other speaker. Constant output at high volume, particularly on tracks with a prominent bass guitar or heavy drum beat, will quickly cause the TW-S7s to fail in a most unflattering way. While most other USB speakers will crackle on the fringes and interject brief periods of silence if overdriven past what USB can supply, the Olasonic speakers will keep on going only to sputter on the bass. Crackling and pausing in this case is preferential because it simply halts the music. A sputtered bass line though has the potential to irritate beyond belief, much like a teenager attempting to play Stairway to Heaven but missing a third of the notes.

That’s not to say that the SCDS system is without merit, however. On bass-light tracks such as Van Halen’s Eruption or many classical music selections, the Olasonic speakers are able to reach much higher volumes without distortion than other USB speakers. Even the Logitech V20, formerly the king of USB-powered desktop speakers before it was discontinued, are very much outclassed by the giant eggs in both terms of loudness and overall sound quality. It’s a night and day comparison between the V20s and the TW-S7s, and yet that’s what I’d say about the V20s next to just about any other USB speaker.

At moderate listening levels for sitting in front of a desk, the Olasonics sound absolutely phenomenal. The sound is brilliantly spatialized in a way that envelops you, and manages to do so without stumbling across the pitfalls of a hollow sound that plague other non-directional speakers. If anything, the sound is very much full-bodied. Highs are stunningly clear, mids are well-pronounced, and bass has an excellent depth and kick that never sounds boomy or leaves me wishing for a subwoofer. Olasonic has clearly taken its time with balancing the TW-S7 and has managed to create something truly extraordinary here. 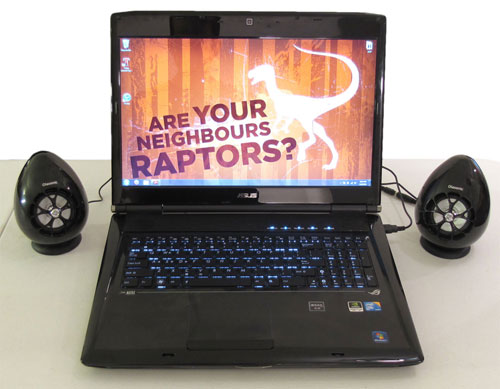 The best way to keep the TW-S7 speakers performing at their best is to maintain a tight grip on the volume control. Depending on the genre of music, these speakers will become unwieldy and start to sputter at anywhere above 27-50% volume. With my tastes in rock and trance music, the threshold is closer to around 30%. Having the speaker volume restricted to less than a third of the range obviously doesn’t do well for fine grained adjustments, so Olasonic recommends to lower the mixer volume on individual applications such as iTunes so the overall speaker volume can be kept high. This solution works but I find it a burden to make changes for every application that I launch, especially with full-screen games. Typically I’m appreciative of extra amplification headroom for whenever I stumble across a YouTube video with low volume, but I believe that Olasonic has taken the concept too far in this case. 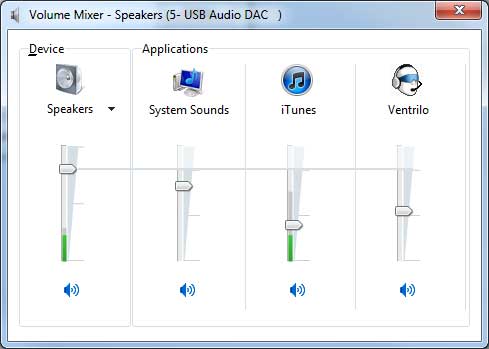 I’m rather impressed by the Olasonic TW-S7’s sound qualities. Their enveloping sound has plenty of thump and kick, and yet there’s a perfect harmony between the bass, midtones and highs that sounds just right. The TW-S7s sound better than any pair of USB-powered desktop speakers that I’ve used to date, which is why I find it such a shame that they’re also so terrible once the volume is turned up to a medium-high level.

USB’s 2.5 watts of power will only get you so far before distortion kicks in, and while Olasonic’s SCDS dynamic output manages to somewhat bypass that problem for lightweight genres like classical music, anything with a bass line will quickly find itself choking for more power. There’s no way these speakers could be considered portable, so I find it hard to understand why Olasonic would give themselves such a debilitating handicap that’s made all the more obvious by the speakers’ outlandish volume range. Had Olasonic decided to include an AC adapter or a dual USB plug for additional power along with some stands that provide better resistance against the bass kicks, the TW-S7s would have been an easy recommendation for a decent 2.0 stereo system. But with an asking price of $100 and the current set of flaws, my advice is to hold off on purchasing until these drop below $70 or Olasonic releases a second revision.

Pricing is last updated by Amazon on 2022-12-02 at 16:00.  When you buy through Amazon affiliate links on our site, we may earn an affiliate commission.