From performance to form factor, the portable drive is a significant upgrade from previous models - only limited by its capacity. If 320GB of blazing fast 7200-rpm performance is enough room for you, this is what you want.

Design – Thin is In

As soon as I took the Slim out of its packaging, I knew that Seagate had truly made something unique as this is one amazingly thin drive. In fact, it is not thicker than a Super Talent 32GB Express Duo, yet packs in 10 times the amount of space. Even the adapter has gone on a diet and is down right svelte. With that being said, it may have gotten smaller, but the magic of the GoFlex system is still in full effect as standard cables will work on it and vice versa… though doing so would look odd.

While the thickness of the drive has been slimmed down to an amazing 9mm, the width and depth have not changed. This is for the simple reason that while there was some room to manoeuvre on the thickness of the GoFlex devices, there is only so small you can make a 2.5″ hard drive based device.

To be blunt, this 9mm thickness is quite an accomplishment as the Slim’s case really isn’t that much bigger than a bare 2.5″ hard drive. In fact, it is 0.5mm thinner than most 2.5″ form factor internal hard drives which are 9.5mm thick. To put this further in perspective, the Slim is thinner than most pens and is even thinner than my “Every Day Carry” Gerber skeletonised folding knife. Now that is thin.

How Seagate was able to do this was by making a custom 2.5″ hard drive which is only a single platter high. To be precise, the GoFlex Slim uses the 7mm thick Momentus Thin, model number ST320LT007-9ZV142. By trimming the casing of the hard drive housed within it down to the absolute minimum, Seagate was in turn able to make the Slim’s all black external case that much thinner as well. Of course, the downside to making things as small as possible is sacrificing the storage capacity. In this instance, it is “only” 320GB of space. This should be enough for most consumers needs, but it does make the capacity seem as puny as the dimensions when compared against external devices which are over four and a half times large in capacity.

As with all things in life, the trade-off for making such a thin drive means less capacity for your hundred dollars. However, helping to offset this lack of cavernous capacity is the fact that the Slim is a 7200-rpm device. This means that while it may not have the same capacity as the bigger siblings I have looked at, it should be much more speedier than other 5400-rpm counterparts. This difference in speed should really make as noticeable impact on small file transfer speeds as it does in ease of transportation.

On the software side of things, the Slim has also gotten an upgrade. While the Seagate Dashboard is basically the same as previous GoFlex models, the software is not. To be precise, previous versions came pre-loaded with Memeo Backup Basic which while a decent software solution was a tad on… well, the basic end of the spectrum. Compare and contrast this with the Thin’s premium version and you instantly can see the difference. 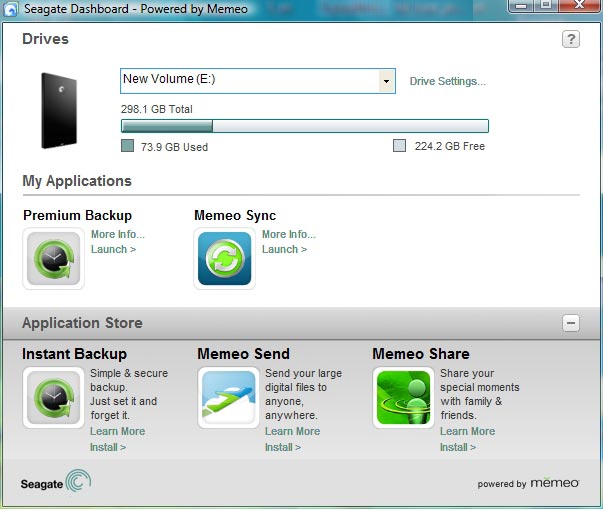 To be blunt, the Memeo Backup Premium software solution is pretty much near everything you could ask for in a backup and restore solution. You can not only backup to different devices (and encrypt the data), but you can also setup complex backup schedules that are completely hands off and automated. Want Memeo to backup all your documents and pictures every night? It’s as easy as doing a custom job and telling it to do so. 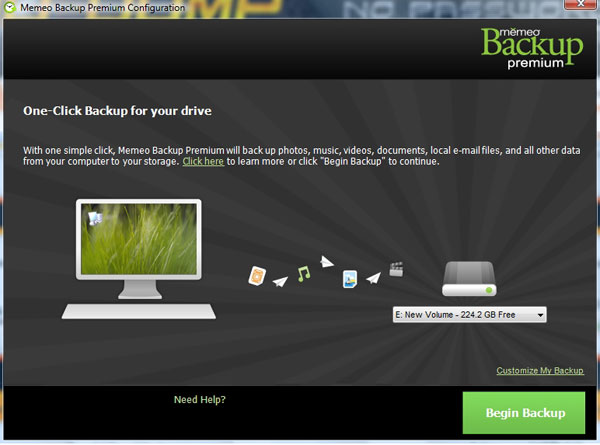 Not only is this program powerful, it is also user-friendly. If you want to do basic things, it will have you equally covered and do so in a very intuitive and easy to learn manner. To be honest, the only feature missing from Memeo is the ability to make bootable media for disaster recovery. If it had this, I may have just been tempted to use it instead of Acronis for my disaster aversion & recovery “go to” program. The fact that Memeo comes free of charge with the Slim is simply astounding as this really is almost too good of a program to include for “free”. Color me impressed.

The real world performance was not only as good as I thought it would be, it was better. I can honestly say this wasn’t totally unexpected as I knew this itty-bitty drive had performance to burn, but wow is it ever fast It really doesn’t seem to matter if the files are small or large, it just burn through them like it was either a flash drive or a big and much more expensive GoFlex Desk. 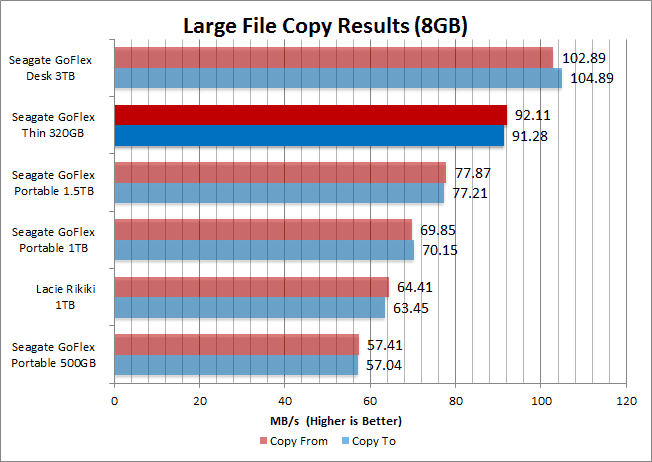 These numbers really just cement in my mind the performance this drive has. While it may not seem like a lot these differences on the low end, coupled with great mid and sequential speeds makes the Slim a triple treat with no area it is less than optimal in. 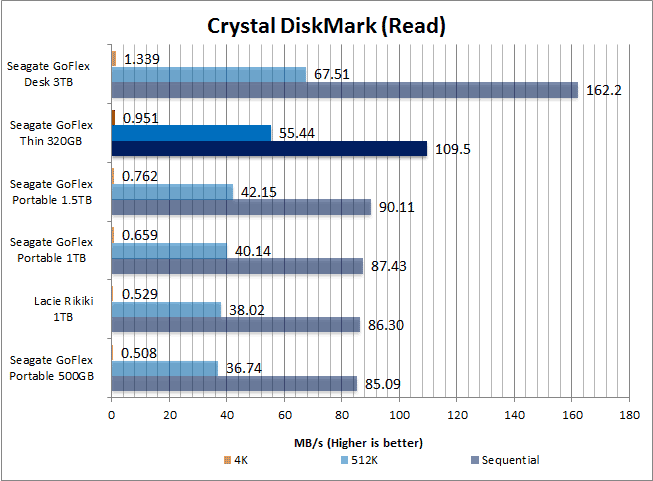 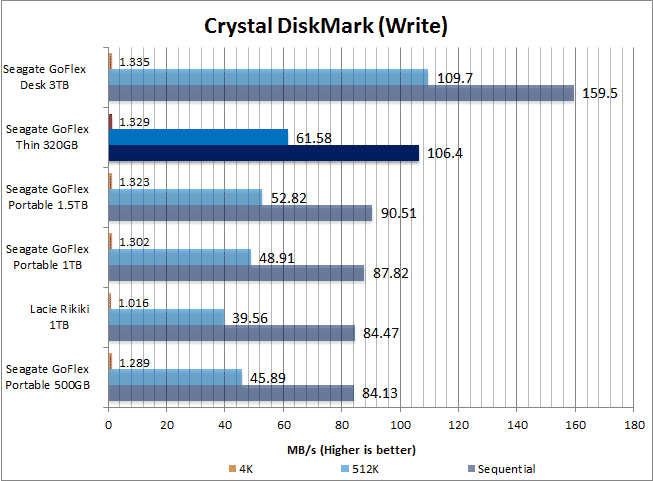 After using the Seagate GoFlex Slim now for a couple days straight, I can honestly say that I am not only impressed with the drive, but also like it. It has the performance of a much bigger device and in fact, it is faster than some USB 3.0 flash drives I own – yet has ten times the space. This coupled with a footprint so small as to be mindboggling for a hard drive based device really does make it a winner in my mind.

I think Seagate has succeeded in making a device which will change most people preconceptions of what a 2.5″ external storage solution can be. The only caveat worth pointing out with the Slim is the fact that it is only 320GB. This is a lot of space, but by the same token you are going to pay a premium for all that speed and all that downsized footprint. While one hundred dollars is not all that much, you can get a lot more space for the same monetary outlay if you go to the full-sized GoFlex, LaCie or any of the other popular brands of drive available. I personally can see this being a good trade-off for numerous situations, but if you need to move truly massive amounts of data via a “sneaker Net”, then the Slim will not be your best option. In the end, only you can decide if this portable drive is right for you, but I think many people will find it a perfect match and it really deserves to be on you short list for serious consideration.