There really is not much not to like about the SIIG USB 3.0 hub as it does exactly what it sets out to do: give you more options. Plus, it comes with a generous 5 year warranty. 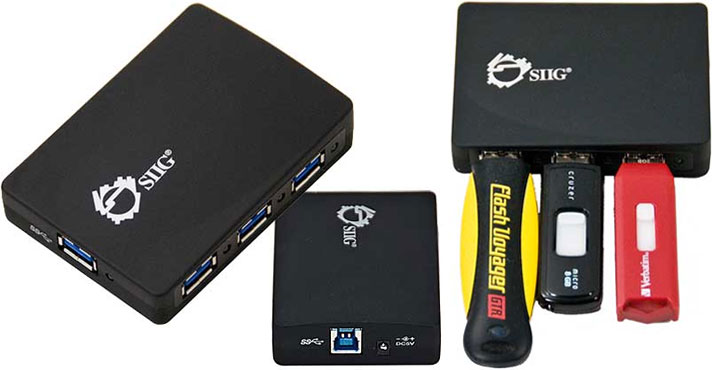 This 4-port USB 3.0 hub is one itty bitty piece of kit.  While SIIG doesn’t list any official dimensions, it is about 2.5″ x 3.5″ x 0.5″. This in my books classifies this as one heck of a compact powered hub. To really understand how small this hub is, a photo down below shows the hub compared to a deck of cards. While my photography skills does not do it justice, this hub uses the same rubber like plastic materials that SIIG USB 3.0 drive dock uses. So while it may be small, it is going to stay where you put it and not slip and slide like some other hubs I have used in the past did. 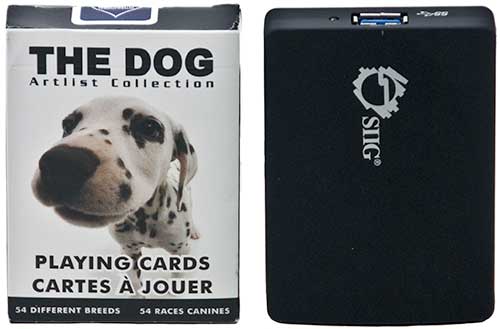 As you can see, the layout of this 4-port USB 3.0 hub is a little on the odd side. The four ports do not line up one after the other along one side like many hubs layout. Rather you have three along one side and a single one at each end. The one all by its lonesome at first didn’t make any sense to me, but then I realized that SIIG also makes a seven port version of this hub and it all became clear. Both hubs share the same form factor and case, the four-port version simply omits one side’s worth of ports.

The upside to having a single port all by itself is that even the largest of flash drives will not block any of the other ports. This certainly is something to consider, as not all devices have standard width. Though to be honest, even a Corsair Flash Voyager GTR  will not block access to the other ports even when plugged into the “middle” of the three ports. However, if you have one of those extra beefy 128GB version of the GTR, this end port will indeed be a veritable godsend.

As shown in the picture below, the SIIG hub uses a single VLI VL800 controller chip. To be precise, this is the “VIL” branded VI810 controller chip. In case you are wondering, “VLI” stands for VIA Labs Inc. This is a USB 3.0 hub controller with support for four downstream ports and supports the USB Battery Charging Specification. This means it can output much more amperage than a typical hub can. The specification also states a max draw of 1500mA on a standard USB 2.0 A cable during low bandwidth communications and 900mA when used in conjunction with High Bandwidth connections. While SIIG does not list the actual max power draw per port, a safe assumption is 900mA per port as this conforms to the USB 3.0 specification.

Personally, I consider these results to be a tie as the difference is so minor as to be negligible. One tenth or a couple of tenths of a megabyte per second is a slight difference to say the least. 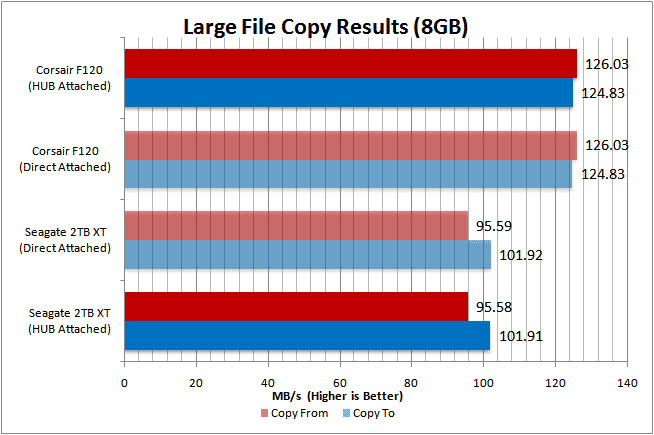 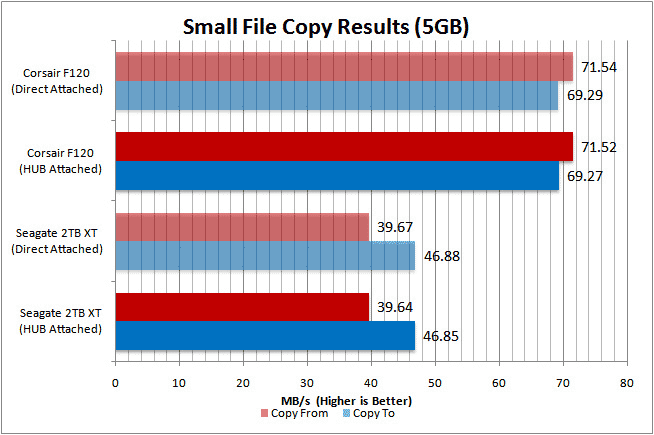 To see exactly how good this hub is at its claims of being able to safely power USB devices, I devised a simple little test for it: plug in a crap load of USB powered hard drives! To this end I dug out my Seagate GoFlex Portable drive, a Vantec Nexstar 3 (2.5″ only model) with a Western Digital 500GB Blue hard drive in it, a Seagate Momentus 5400.4 250GB drive (and attached a GoFlex USB 2.0 cable to it) and a Corsair Voyager GTR. I then plugged them all in and copied files from one to the other all at the same time for maximum power draw. I can honestly say I was impressed as that is a lot of electricity for the hub to provide, but provide it, it did and without any complaints I might add. 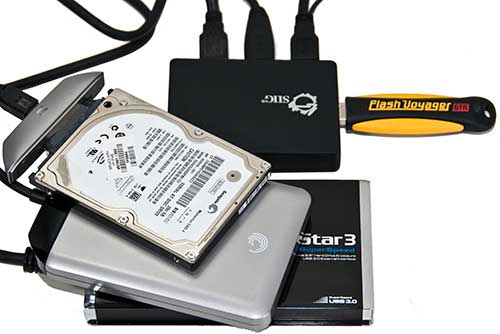 There isn’t much to dislike about this SIIG USB 3.0 hub. It is small and compact so it will not take up much room. Yet it has a secure grip and feel to it so it is not going to go slipping and sliding all over the place and will stay where you put it! Where the form and aesthetics of this hub are very nice, what I really liked was the fact it does exactly what you want a hub to do: add more ports without introducing in a performance penalty.

While it does share a single connection, this is a lot of bandwidth and should be more than you will need in the foreseeable future. As long as you don’t plan on populating and using all four ports at the same time with high bandwidth devices, then this is perfectly fine. USB 3.0 offers an extremely fat bus that can easily accommodate a bunch of devices at the same time.

When you add in features like the ability to safely power a whole bunch of equipment, it is my opinion you end up with a very good product. To my way of thinking, there really isn’t a downside to this hub besides its asking price. Even here, $59.99 is not that huge an investment. And if you are like me and hate to go digging around the back of your case looking for free port, the cost is certainly outweighed by the ease of use. The included USB 3.0 cable is easily long enough to allow you to plug it in and place it near the front of the case, on top of the case, or pretty much anywhere else that is more convenient for you.