14 October 2020, Comments: Comments Off on PC USB Speakers Worthy of Our Choice

Vast majority of laptops, save for rare breeds like the MacBook Pro, come with mediocre built-in speakers at best.  If you need an upgrade that blasts out room-filling audio and that produces a fuller, richer range of sound, here’s a list of PC USB speakers deliver just that and more.

The Creative Pebble, now in its third iteration, has evolved into a true USB-C speaker set.  Not only are the speakers powered entirely by USB, but they also receive digital audio from the same port.  The latest Pebble benefits from having a pair of 2.25-inch drivers, delivering a peak output of 16W. The addition of Bluetooth 5 in this version makes the Pebble more versatile.  Granted, single-piece Bluetooth speakers are like a dime a dozen these days but the Pebble’s traditional two-channel setup allows for better stereo separation. 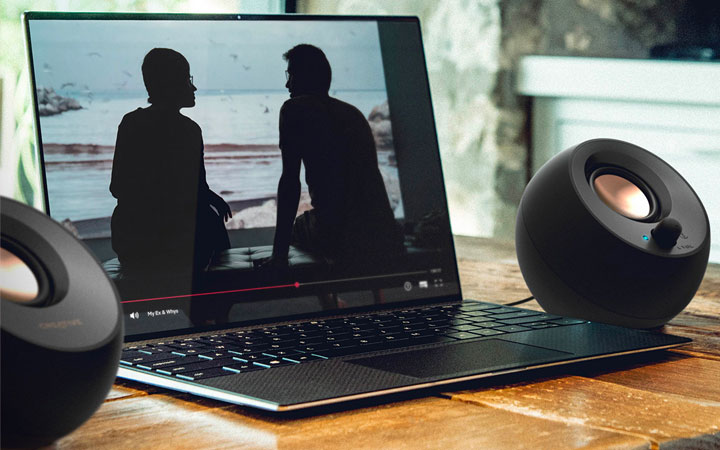 In terms of design, the Pebble retains its minimalist eggshell-like finish with drivers pointing at a 45-degree angle so audio is directed more towards the listeners’ ears.  Each speaker is measured at 4.8 by 4.7 by 4.6 inches.  You will find the volume knob and Bluetooth pairing button as well as gain switch (to activate amplified audio) on the right speaker.  The high gain mode only works when you pair the Pebble with a 10W USB port.  If you are in the market for a sub-$50 speaker set, be sure to check this one out.

Logitech returns to the gaming speaker arena with its G560 after a long hiatus.  Like its competitors, the Switzerland-based PC peripheral manufacturer is already heavily invested in RGB lighting.  It seeks to raise its game further with LightSync, which aims to transform the ambience in your room by throwing different lighting against the wall from the LEDs behind the speakers. 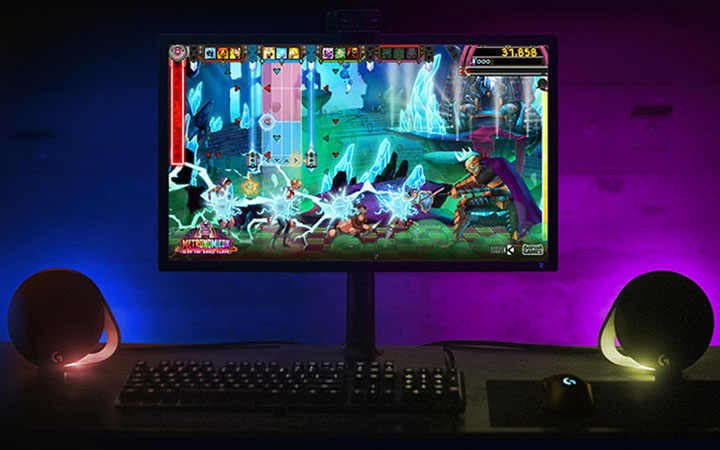 The G560’s gaming software does all heavy work of coordinating with the speakers’ RGB lights to create custom lighting effects that reflect on different gameplay scenarios.  If you are being chased by highway cops in GTA5, lights behind the two satellite speakers will start flashing red and blue.  Likewise, if you are getting low on health, the game developer could make the red ambient light giving a rapid breathing effect to alert you of the current threat.

The same mechanism apparently works as well with movies as it does with games.  However, there’s a slight lag for the reactive lights to respond since the software needs to process the screen refreshes before changing the colors to match.  Lastly, in the audio department, the $200 Logitech’s 2.1 USB speaker set packs a downward firing subwoofer and it is capable of delivering 120W RMS as well as simulating surround sound, courtesy of DTS.

It’s been ages since Razer has released gaming speakers as the company has kept busy with everything from its first smartphone to powerhouse laptops to a variety of peripherals.  The $149 Nommo Chroma marks Razer’s return to the desktop PC speaker market.  Made for gamers in mind, its RGB LED strip around its base can put on a light show and the bundled Synapse software can also synchronize lighting effects between compatible devices. 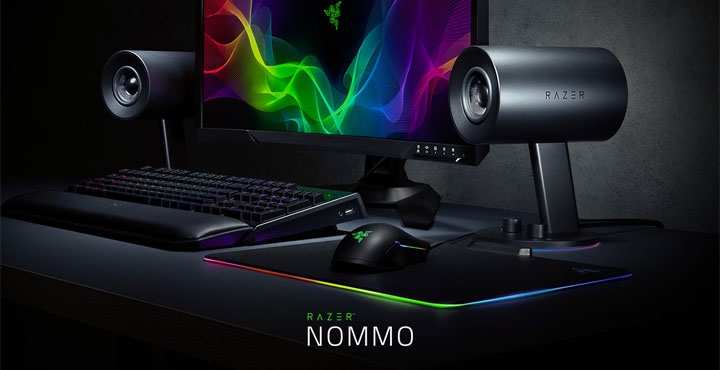 The core of the Nommo is powered by a 3-inch custom woven glass fiber driver in addition to rear-facing bass port in each of the two cannon-shaped speakers.  Interestingly, the streamlined design shares its aesthetic with Dyson’s iconic Supersonic hair dryer.  Inside the Razer is a USB DAC but it’s not rated for high resolution audio playback.  But you will need to connect to USB as Synapse controls the lighting and allows you to toggle between sound modes (i.e. games, music, movies) to adjust EQ accordingly.

One of the circular base plates for the speakers have two knobs – one for volume and the other for bass adjustment.  Razer’s Nommo Chroma lacks surround sound simulation which would otherwise add entertainment value to gameplay.  For that, you have to opt for Nommo’s $499 Dolby-certified brethren which also comes with THX certification; a downward-firing subwoofer; silk dome tweeters; a discrete control pod; Bluetooth connection; and a hefty price tag.

Creative’s well-known Sound Blaster brand still carries significant weight with many old-school gamers.  With its return to the gaming speaker market, Creative makes sure that its latest Sound BlasterX Kratos 5 adopts up-to-date technologies.  The 2.1 speaker set with on-board 24-bit / 96kHz USB DAC is the first from the company to equip with Aurora Reactive that is essentially Creative’s solution to delivering ambient lighting that enhances immersion during gameplay. 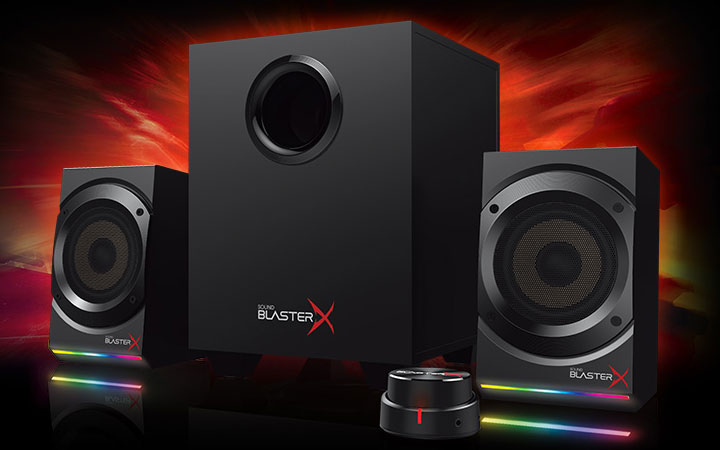 The LED lighting system is customizable with 16 million colors but you can also choose from 6 color presets.  Accompanied by Windows-only BlasterX Acoustic Engine Pro software, other Creative’s RGB-enabled peripherals will work alongside the Kratos S5.  The same software also handles 7.1 virtual surround sound.  As a 2.1 unit, the Karatos S5 comes with 4″ satellite drivers and 6.5″ down-firing subwoofer driver in enclosures made entirely out of wood for better resonance damping as well as optimized delivery of a warm and natural sound.  Last but not least is an audio control pod that provides convenient access to your choice of microphone and headset. 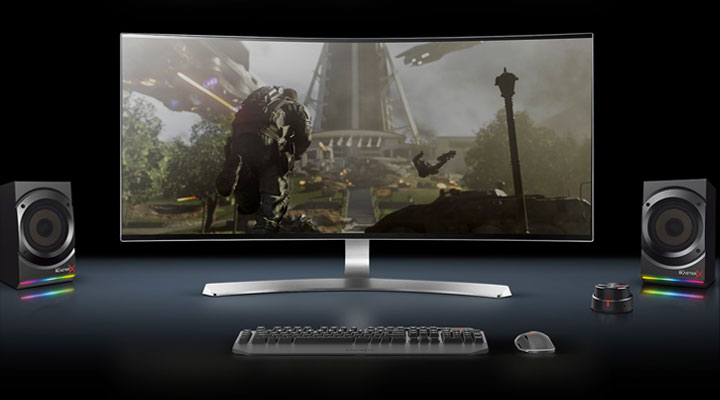 When it comes to selecting USB speakers to replace the ones built into your laptop, there’s typically a few varieties to choose from. Some are meant to be stood on a desk, some may latch onto the sides of the laptop screen, and still others will grasp the top of the screen in a one-piece soundbar configuration. No matter the design there’s usually an excess of USB cable slack to contend with along with excess connecting wire if the speakers are split. JLab shuns these traditional designs with their B-Flex X-Bass (reviewed in 2011) and instead takes a more asymmetrical, cable-free approach that’s sure to turn heads.

In essence, the B-Flex X-Bass takes a pair of stereo speakers rests them atop of a flexible metal USB stalk that behaves like a reading lamp. The appearance is so off-kilter that it honestly becomes a slight distraction when plugged in. For its size, the B-Flex manages to pump out a surprising amount of sound. The crisp highs and kicking lows certainly live up to the hype, though you’ll want to tweak the EQ to make up for the neglected midtones. The unique design inherently works well for laptop users at the desk or on the couch. Overall, this one-piece USB speaker delivers amazingly loud and vibrant sound for its diminutive size, but suffers from a lack of mids and highly directional sound.

Olasonic’s TW-S7 (reviewed in 2012) is a pair of bus-powered speakers that are purported to deliver 10W+10W stereo sound over a single USB cable. Achieving 10 watts per speaker seems impossible as the USB 2.0 can only deliver up to 2.5W total, or 12% of what Olasonic claims to be able to deliver. 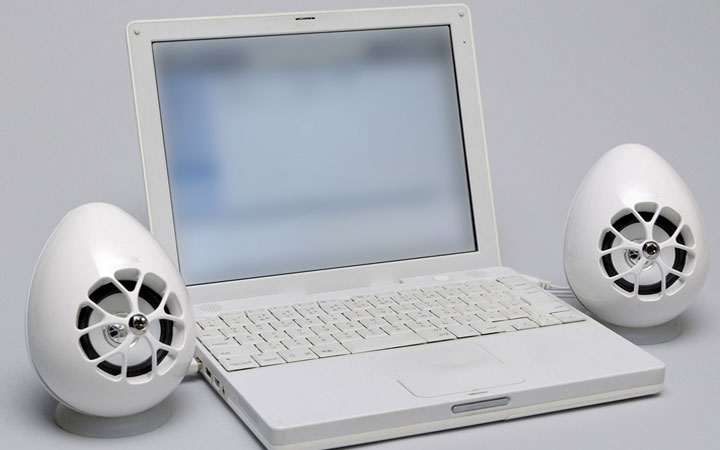 The secret to this high output lies in the fact that the TW-S7 stores unused USB power in on-board capacitors. Since maximum output is rarely ever achieved as there is a varying of sound intensity at any given sound level, there’s unused power that can be repurposed.

Having said that, the downside is you will not always get that 20W of power as once the capacitors are drained you will be back 2.5W. This setup is not all that unique we’ve seen something very similar before. What’s interesting is the fact that Olasonic has opted for massive 60mm drivers. These certainly will help with not only the low end, but also allow for crystal clear sound at higher sound levels. You can still grab glossy white or black TW-S7s for around $80.

JBL definitely thinks outside the box with the Pebbles – a pair of snail-lookalike USB speakers.  They are more just than conversation pieces as the unique design does serve a purpose.  You can either use them in a vertical or horizontal orientation.  More importantly, the tall but narrow profile allows for the large 50mm drivers to be located in the front while allowing a fairly large bass reflex zone in the rear.  This combination allows for a very large soundstage without losing fidelity but unfortunately, the Pebbles only support up to 16-bit 48kHz audio. 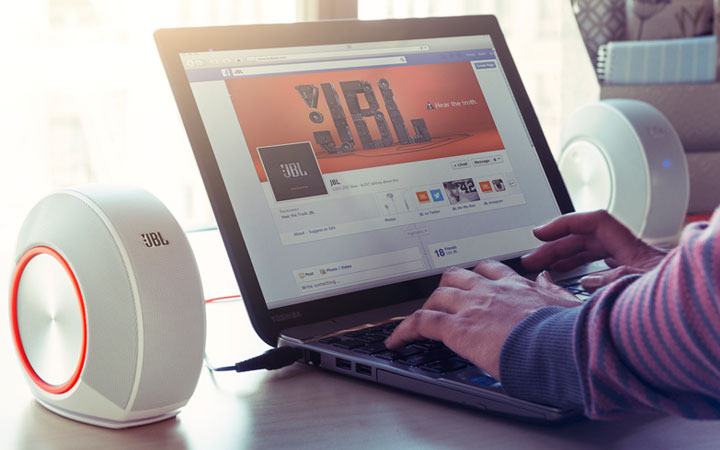 Like many USB-powered speakers, all the electronics – USB DAC cable, as well as the volume knob – are located in the right speaker and the left plugs into it via a simple 3.5mm audio jack.  This means you can use either in monaural mode via either USB or analog connections and you will not need any special software to use them in either mode. As an added bonus, JBL includes a winding grove along the flat bottom of the right speaker for easy storage and transportation.

That’s all for now.  Hope you enjoy finding these USB speakers suited for your needs.  If you find anything else that belongs to this list, please let us know by leaving your suggestion or comment below.