While the performance it offers does vary from good to great, the SandForce-powered flash drive is nearly the perfect blend of power and portability. The increased longevity it offers is also a bonus.

For many, using anything but a solid-state drive for their system would be unacceptable from a performance standpoint. So why does one has to settle for less performance from a flash drive? This little drive from Super Talent is powered by an SSD grade controller in the form of the SandForce SF1200. This in and of itself would almost surely guarantee a cult following. Does it sound too good to be true? Is the Super Talent Express RC8 – now finally certified for Windows To Go – the perfect blend of power and portability? Check out my full review to find out.

While the Express RC8 is not the first flash drive I have seen that comes equipped with a high-performance controller (that honor belongs to Kingston with their HyperX Max), it is the first which does not have a 2.5″ “hard drive” form factor. In fact, if you were to pick up the RC8 and hold it in your hand, you would think it was nothing more than a typical flash drive; albeit one in a very nice aluminum housing. 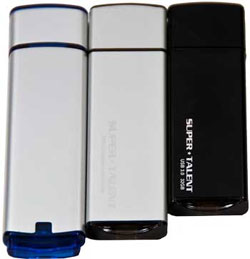 The RC8 literally only weighs as much as your typical flash drive and has dimensions (92.7 x 25 x 8mm) that are very similar to a Express RAM Cache from the same company. The housing has gotten a nice upgrade too from the RAM Cache in the form of a molded end cap holder. With previous Express drivelines, the USB port cap could not be fitted to the end of your drive, this made it much easier to lose whereas the RC8’s cap can easily be fitted to the opposite end of the drive, making it much more safe and secure.

SandForce in a Flash Drive

The amazing engineering which went into this design really is what makes this drive special. Not only is Super Talent able to grasp the idea that consumers would love a truly high-speed flash drive – and then went out and made it – but that they also want something that is not as big or as heavy as a regular portable drive. In order to do this, Super Talent opted for four dual-die ONFi 1.0 NAND chips. What this means is that while the footprint of the NAND chips is only as big as that of four chips, there are in fact 8 discrete NAND packages housed within it. Basically, the second layer NANDs are stacked on top of the first layer. This does take some fancy PCB engineering to ensure there is no cross-talk along with the tracings (i.e. the wires) but good engineers are more than capable to do this.

The sequential speeds should still be very high, but I expect to see other inferior flash drives post just as good numbers. The true power of this controller is its ability to deal with small files. In this area, SandForce is all but unmatched with only one or two other competitors able to give a good showing (such as the Marvell 9174 and Intel X25-M controller, neither of which are offered in thumbdrive form factor).

You wonder if inferior controllers can match this controller on sequential speeds, why then did Super Talent opt for it? The reason is twofold. The first reason is that SandForce controllers automatically encrypt all data on the NAND. This makes the data on the drive secure against snooping. This is actually more a secondary side-effect of how SF1200 works its magic but we will get to that in a second. The real reason Super Talent chose this controller is that it compresses (or tries to compress) all data that is written to it. SandForce claims a phenomenal 0.6x write amplification. This means that for every (for example) 20kB of data sent to the drive, it would only write 12kB to the NAND.

This infers that the NAND inside will last longer than it would with any other controller. However, if you are writing data to the RC8 that is already in a compressed format (e.g. H.264 video and MP3s), it will not be able to further compress that data. Reading and writing this data will also be slower as the controller will have to access upwards of 40% more NAND to read / write it. So your mileage may vary depending on the type of files you store on the drive.

Further helping make the Express RC8 a longer-lived device is something called “over-provisioning”. You may have noticed that this is a 50GB drive, yet it uses 8 “chips” of 8GB. This equals 64GB of NAND. The other 14GB is set aside by the controller. The primary purpose of reserved storage is to replace dead NAND blocks. This coupled with the fact that the SF1200 controller can recover data from an insanely high amount of bad blocks seamlessly to you the end-user (and your operating system) means that as the drive ages and blocks die, your data will not only be safe but you will not even notice any difference.

Compare and contrast this with what happens in a typical flash drive that has dead blocks: the NAND goes “bad”, your data goes “poof!”. Not only do you lose important documents, but most certainly you’ll throw out the “dead” flash drive. Great speeds, ultra-secure data, and a lifespan to make even Methuselah envious, there is not much to not like on paper.

With an average of nearly 220MB/s, the Express RC8 certainly is one peppy little flash drive. It really is in a different league than similarly-sized storage solutions. I just wish that Super Talent had opted for the SF2281 controller as I would be looking at numbers twice as good as this. 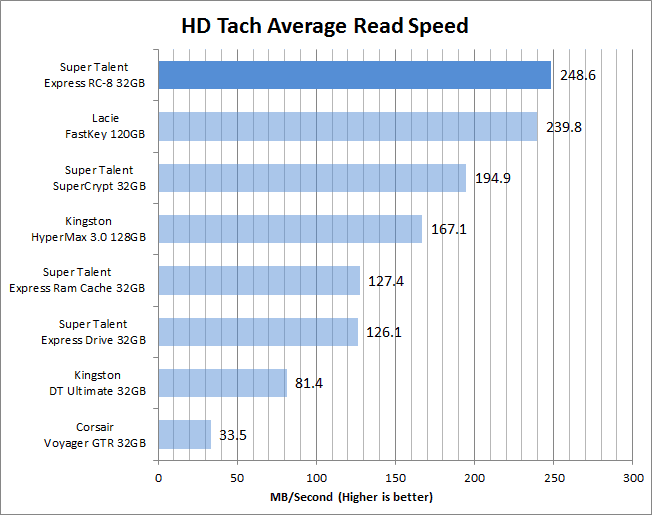 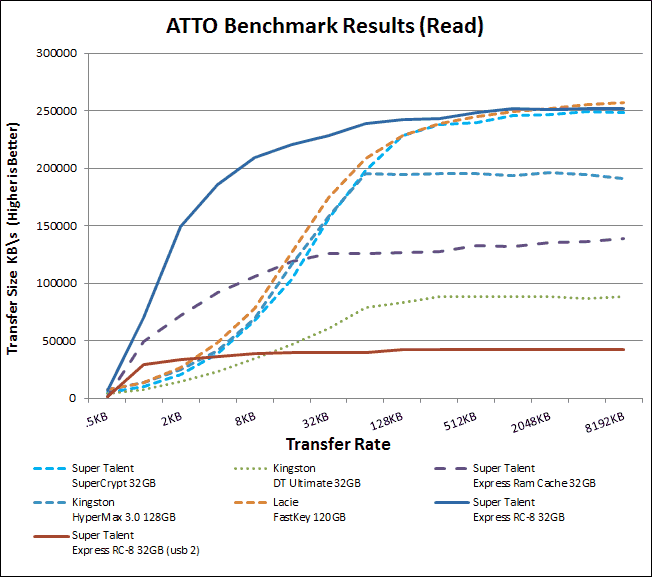 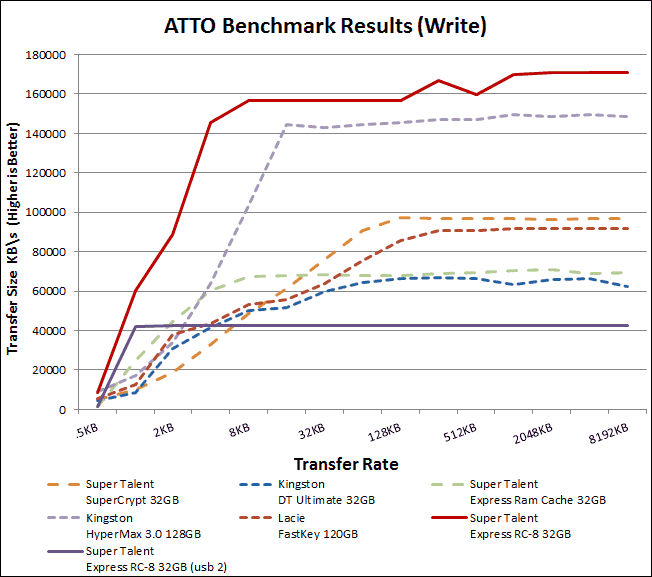 As with the HDTach performance numbers, the ATTO numbers are simply insane for a flash drive this small. Even when compared to larger devices, the RC8 still can easily hold its own and even beat some of them. It easily justifies its asking price when used under optimal conditions. 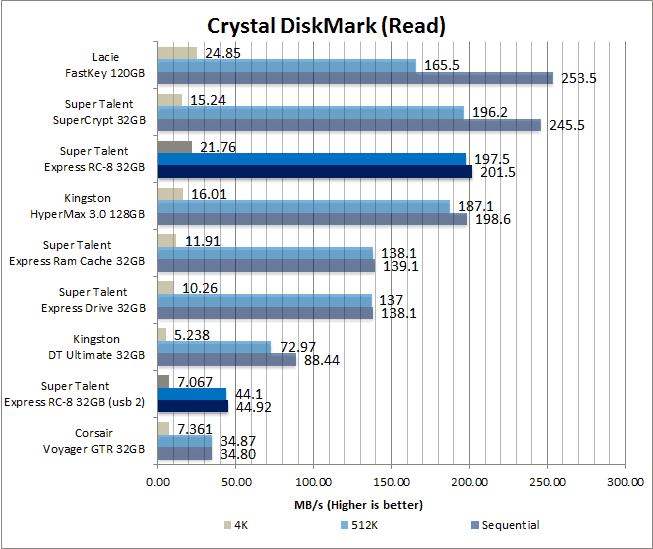 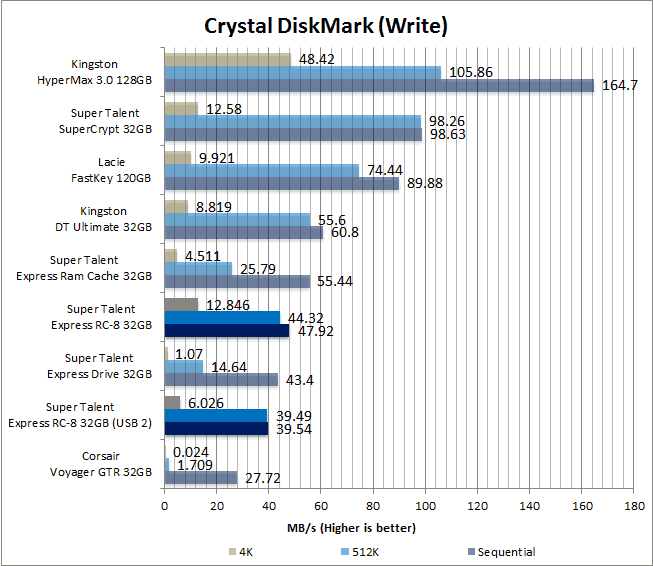 Unfortunately, while the read performance is still very good, the fact of the matter is the write speeds are sub-par. The reason for this wildly different variance from ATTO is simply: incompressible versus compressible data. ATTO uses easily compressible data and thus plays to SandForce controller’s strengths. Crystal DiskMark, on the other hand, chooses data that cannot be compressed easily. In other words, you can consider ATTO a best-case scenario and this a worst case, with real-world falling somewhere in between. It is also noteworthy that while the sequential is not exactly optimal, the mid and small file size performance is. To be blunt, this drive may lose some on the high end but it more than makes up for it on the low end; even with data that it can not work its magic on.

It is also worth pointing out that when used on a USB 2.0 bus, this is easily the most powerful flash drive we have ever seen. I have a feeling that if the USB 2.0 bus had nothing else on it (e.g. mouse, keyboard, etc), the numbers would have been even better. This controller simply is a speed demon no matter what USB protocol you use. 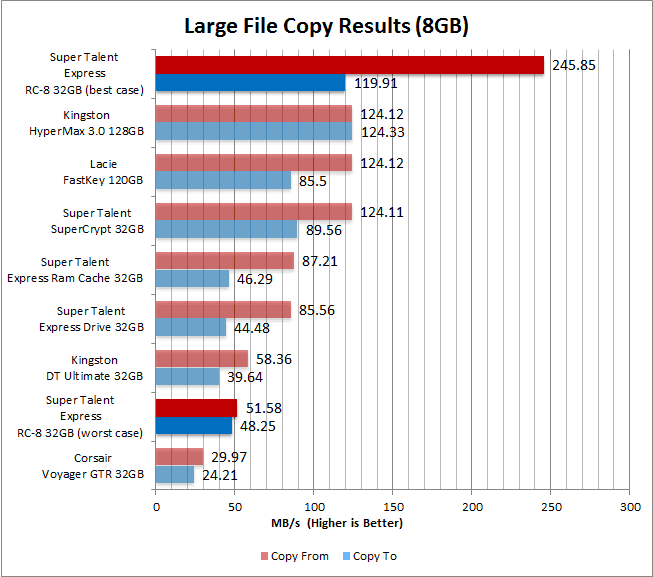 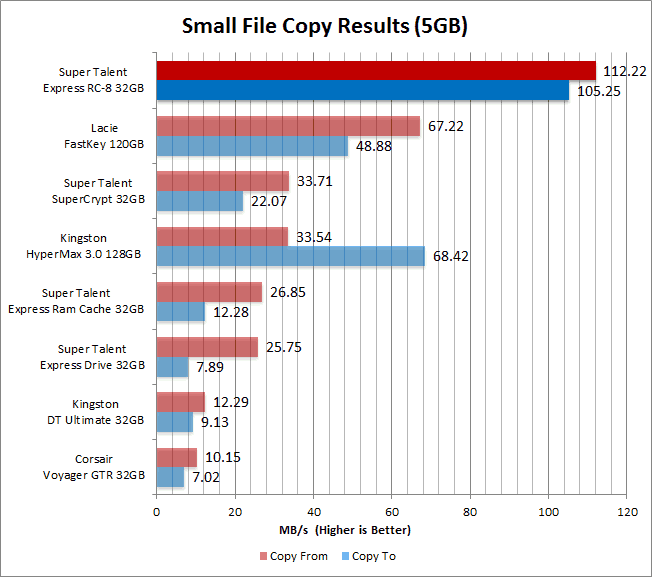 Real-world file copy results are a bit of a mixed bag. On the one hand, the small file performance of this drive is simply staggering. However, without typical large file test, the numbers were extremely low. This was because our standard large file test consists of already compressed data. For this reason, I have included a second set of 10GB worth of data which was still made up of the same number of files, but which consisted of data easily compressible. You can consider these results the best and worst you will encounter. This is the duality of this drive and really sums up its nature perfectly.

The last time I checked out Ceedo running on Express RAM Cache, I walked away fairly impressed. This time, not only was I impressed, I was blown away. The RC8 is simply a beast when it comes to virtualization; it was just as quick to install and run a program via it as it was to run it on your SSD. If this is something you plan on using on your flash drive, the Express RC8 is simply the best flash drive you want to own. Even a Kingston HyperX Max was slower at running applications in a virtualized setup than this drive. I really cannot underscore how amazingly fast this drive is at loading applications and the such.

The Super Talent Express RC8 really is undoubtedly an impressive product. It may not dominate in all areas and all tests, but overall, this is one of the best flash drives on the market today. Super Talent really has been able to create – what is for all intents and purposes – an SSD with a form factor of your typical thumbdrive. You truly have the power of an SSD with the portability of your typical flash drive. This makes for one potent combination.

The fact that the RC8 should last longer than your typical flash drive is just icing on the cake for us. When you combine good to excellent performance with a small footprint and give the resulting package a reasonable asking price, there really is nothing else you can say but: highly recommended.