20 March 2020, Comments: Comments Off on Best USB Gadgets for Trekkies

When people think of Star Trek, its iconic arrowhead-shaped insignia comes to mind. It’s commonly believed to be a stylized version of the NASA emblem.  After all, the ideals of the space agency have inspired Star Trek creator Gene Roddenberry to produce the sci-fi TV series back in 1964.  So similarities between the Starfleet insignia and NASA emblem shouldn’t come as a surprise. 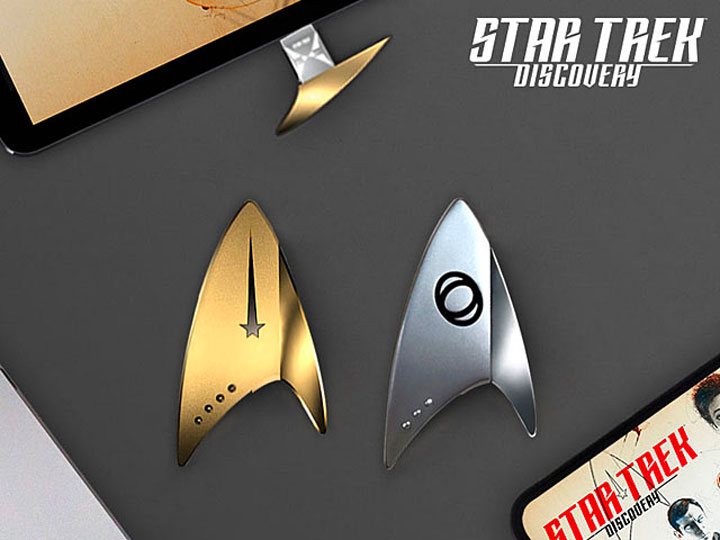 Here is a novelty flash drive disguised as a Starfleet badge, or vice versa.  Based on Star Trek: Discovery series, the badge features a split-delta design with a brushed metal alloy finish.  It’s a collectible Trekkies who may want to own part of Star Trek history.  There are two models: gold-color command and silver-tone science badge.  The USB drive with a legacy Type-A connector is magnetically attached to the other half of the body.  When separated, a USB Type-C adapter also reveals itself.  There’s also a strap hole behind the unit in case you want to wear a lanyard around your neck.

What better way to proclaim yourself as a true trekkie than having this wrap core USB car charger in the cup holder of your vehicle?  For those who aren’t familiar, a warp core is basically an energy production chamber that takes advantage of matter and antimatter reactions to produce the energy needed for starships to travel at warp speeds (beyond the speed of light). 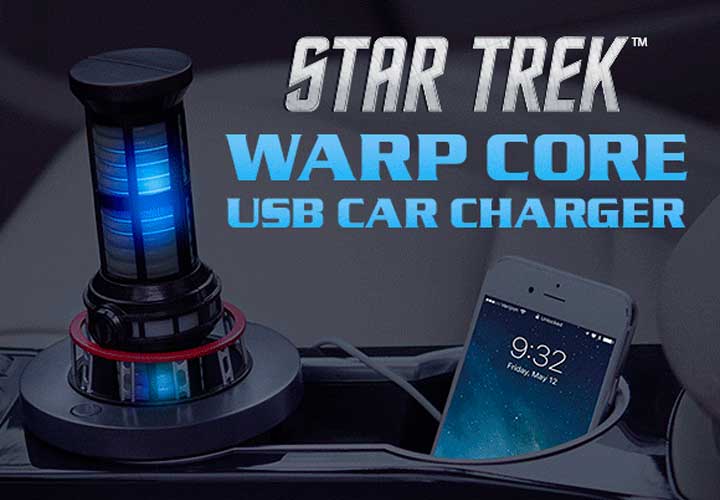 Now, what makes this 12V auto USB charger is that when charging, it emits the warp core’s signature blue pulsing light that is often seen in the Star Trek series. There are two USB ports capable of supplying 2.1A each. So, there you have it – another gift idea for your Trekkie friend.

Calling all Vulcan’s and Klingon’s…. Really. Dream Cheeky is set to roll out a new VoIP/Skype phone in April that should have every Trekkie on the planet drooling.  Heralded at CES, the USB speakerphone is a dead ringer (ha!) for a classic Star Trek Communicator loaded with audio features. 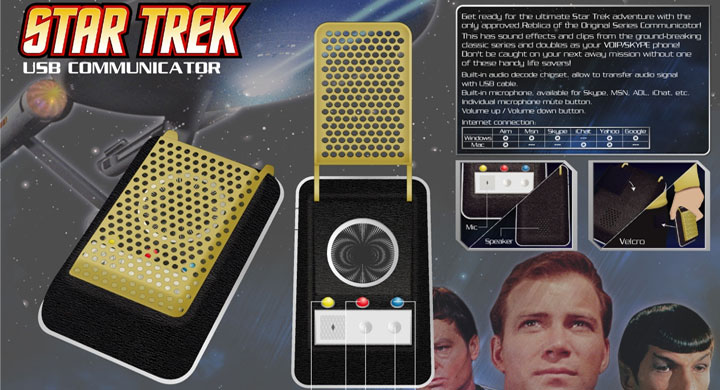 While this Federation-approved replica won’t promise you any booty calls with Orion slave girls it will help you send and receive VoIP calls with ease.  Compatible with Window XP, Vista, and Tiger or above, it features an independent USB sound controller with speakerphone and mic that can have audio routed to and from it at will.

The Star Trek USB Communicator has its own volume control and mute function (with indicator) as well as velcro backing for mounting in the most visible place possible.  Pick it up and answer hails from the bridge or Thailand with a flick of the wrist to the envy of all your geeky friends.  Add to that you can play an assortment of appropriate sound bytes “Transporter room ready to beam up.” Instawin! We give it the highest possible score: 5 out of 5 Shatners.  For all non-Trekkies, there’s always the down-to-earth speakerphone.

Well there’s nothing discrete about this. You set one of these up on your desk and you are proclaiming “I AM THE BIGGEST STAR TREK FAN”.  Not even Philip J. Fry is going to challenge your knowledge of the original series.  This NCC-1701 replica houses a standard, no driver needed, webcam compatible with just about any video chat service you’d care to use (Skype, MSN, Yahoo, etc).  Pair it with the Star Trek Communicator and you’ve got the most immersive Ship to Ship communications package this side of the Orion Nebula.  Only someone with a real Borg implant is going to be able to one-up this setup. 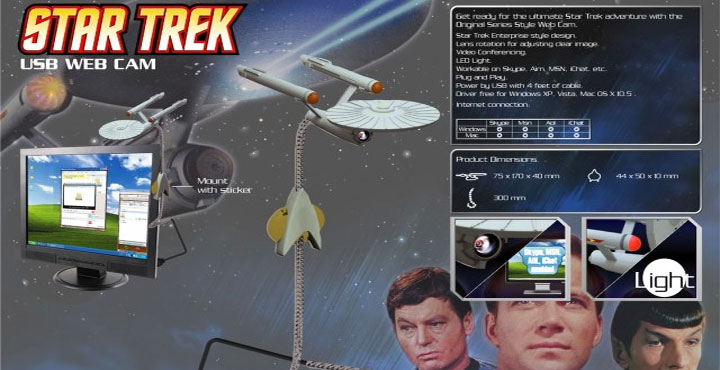 The camera features adjustable focus and lighted Nacelles (the red engine things for the uninitiated).  It has a bendy adjustable flex arm for free posing or it can be mounted to the side of a monitor with the adhesive Star Fleet uniform insignia.  While there’s no word on release date or price, Dream Cheeky is pretty prompt with their releases so expect it shortly.  We hope they hurry, over uncoded channels hours could seem like days.

If you enjoy this, make sure to check out other USB gadget round-up for Marvel, DC Universe, Star Wars, and Transformers.