6 May 2016, Comments: Comments Off on Best Star Wars USB Gadgets for Jedi and Sith Alike

In the era of mobile computing, it doesn’t come as a surprise that we are becoming picky when it comes to chargers. For Star War fans, it’s all the same. This wall charger is modeled after Darth Vader’s helmet. Not only will it juice up your mobile devices, but also serve as a tasteful home / office decor element. 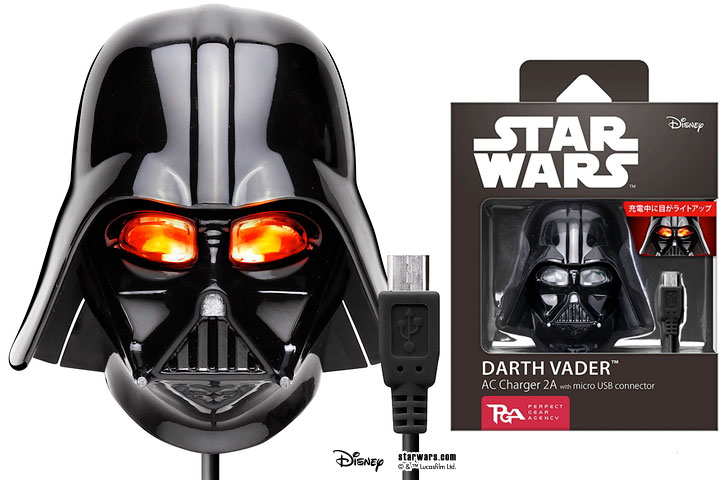 As a Japanese-designed USB charger, you get best of both worlds: crave for perfection in quality and the dark side of the force. It has a pair of illuminated eyes that glows from inside through Darth Vader’s breath mask. There are two models: micro-USB and Apple Lighting. The latter is tethered to a 1.2m Lighting cable, and is designed for none other than iOS devices. The USB version has a cable length of 1.5m, and is intended for virtually almost every other mobile device and power bank. Both variants offer maximum charging rate of 2A with universal voltage standard. 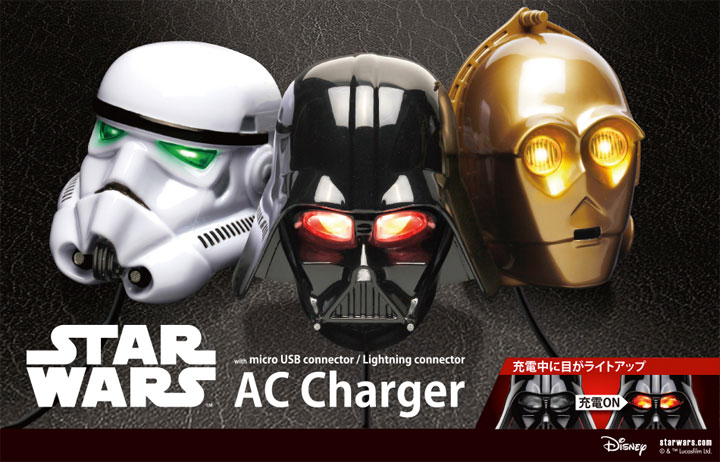 Did we mention the charger is also available in C-3PO and Imperial Stormtrooper?

Trying to keep people away from your cubicle is now fully automated with Yoda USB Desk Protector. The miniatured Jedi master holding the illuminated lightsaber is able to detect anything from 2 to 3 meters away and gives audible “warning” to intruders. 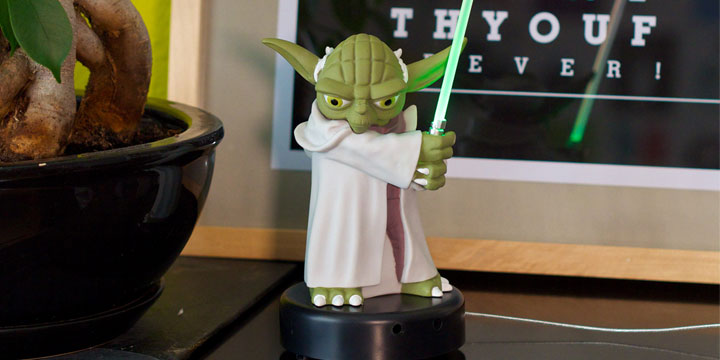 The pre-recorded phrases include the following:

‘In the end, cowards are those who follow the dark side’
‘A disturbance in the Force there is’
‘Retreat! Cover you I will’
‘Still much to learn you have’
‘So certain of defeat are you, hmmm?’
‘Rush not into fight, long is the war – Only by surviving it will you prevail’

Available for pre-order at a measly $25.99, the Jedi Yoda USB guard is modeled after the character from Star Wars: The Clone Wars animated series. It is a keeper for fans of the animated series.

This miniatured helmet of First Order Stormtrooper from The Force Awakens is yours to own for $28 (suggested retail price). Even though this is in a flash drive form factor, the unit measures at 54 by 55 by 72mm. To say the least, it is unusually large for what it does. As it turns out, the helmet also doubles as a USB LED light. 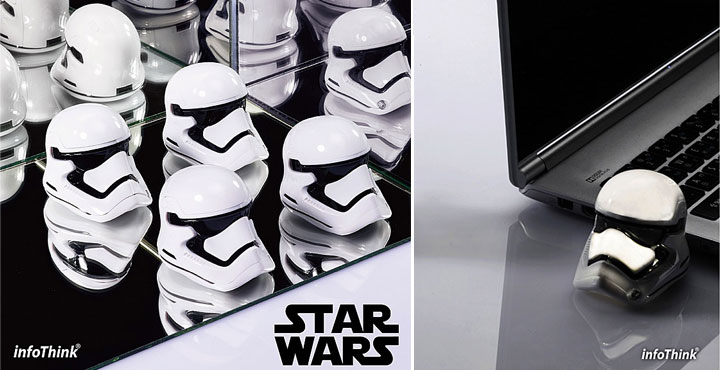 Designed by Infothink and officially licensed by Disney, the LED glows from inside at a flick of a switch beneath helmet. You can get either 16GB or 32GB. It would appear this is exclusively available in Greater China region which includes China, Taiwan and Hong Kong. Fans would have to search for online retailers which import these.

Even though most serious movie geeks want to forget that Star Wars prequels ever happened, most do actually have fond memories of that plucky robot sidekick from the original series. Thankfully, you can now have all the R2-D2 you ever wanted with these gadgets.

USB Hub
With all the USB gear sitting on a desk nowadays, one always seems to be needing more ports. Now anyone can indulge Star Wars fetish and get ports at the same time with the officially licensed R2-D2 hub – from Japanese company Cube. 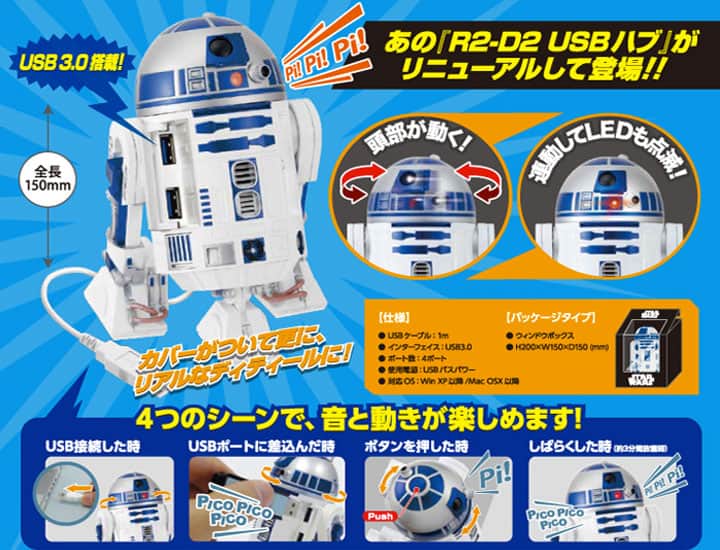 To qualify as fan’s collectibles, hub the can do more than just imitating the looks of the most adorable droid in film history. The dome-shaped head – at the push of a button – can spin on its own. At the same time, the droid makes its signature beeping and whistling sounds as well as showing random light effects. As of late 2015, the hub has been updated to USB 3.0 so you should be still able to find imports available.


Desktop Vacuum Cleaner
Next one is a tiny vacuum cleaner, powered by none other than USB. Again, modeled after R2-D2, the 13.5cm tall USB gadget keeps your desktop free from dust and dirt. It is reportedly powerful enough to suck up bread crumbs as well as pencil shavings despite the fact this thing shouldn’t have high suction power. 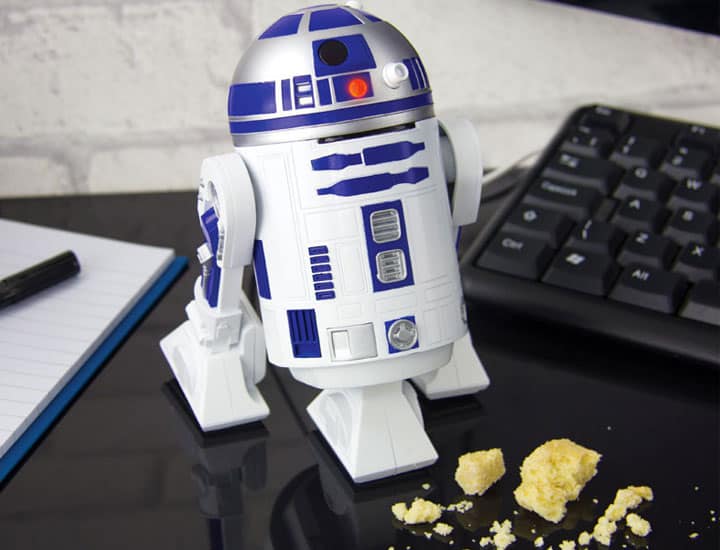 USB Auto Charger
This droid – measuring at 5.5” x 3.5” x 2” – converts any old cigarette lighter into a dual-USB port charger while at the same time fits perfectly in most vehicles cup holders. It may not be able to repair your car but this itty bitty droid does pack quite a punch in that it can provide 2.1A over each of its two ports. This amount of power is more than enough to charge even two iPads at the same time. 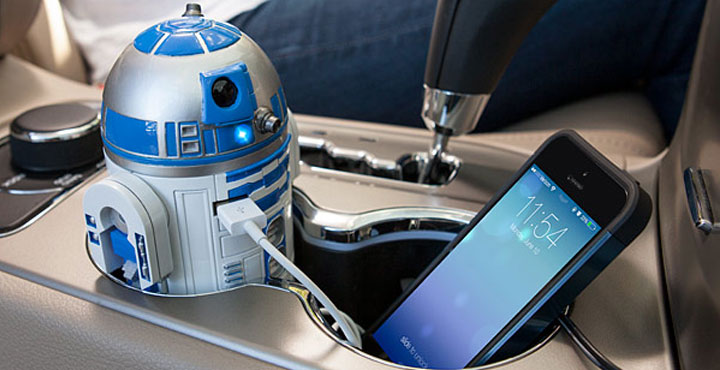 Add in a rotating head; an integrated LED eye that glows blue when charging devices; and the fact that it even ‘talks’ to you in his trademark language of beeps and whistles when charging starts, this officially licensed-charger definitely qualifies as a Star Wars collectible. If interested, ThinkGeek carries it for $19.95 (plus shipping).


Ultrasonic Humidifier
Human geeks who live low dry areas likely depend on humidifiers on a daily basis to make life less unbearable. It wouldn’t come as a surprise a humidifier is a necessity in offices. Here’s a USB humidifier in a miniature model of R2-D2. It uses ultrasonic to create fine mist from water that exists at the top of R2-D2 dome-shaped head. 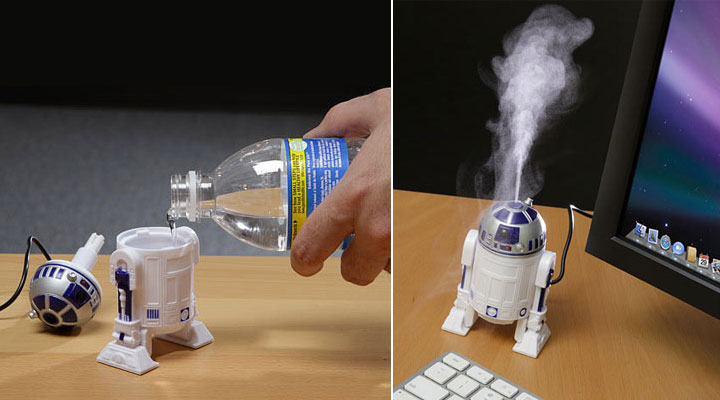 However, if your cubicle is as dry as Tatooine, then this watered down version humidifier just won’t cut it for you. Keep in mind though that ultrasonic humidifier should be used with distilled water, and should be cleaned on a regular basis to prevent spread of bacteria in the air.

Flash drives are synonymous with simple PC storage.  This changed when Mimoco pioneered the category of collectible thumb drives beginning in 2006.  For every year until 2012, a new series of MIMOBOT USB storage in the form of character-based Star Wars figures was released. Over 8 years, there was a total of 31 of themed drives with an additional 9 limited editions made exclusively for the attendees of San Diego Comic-Con.

The original series comprised of R2-D2, Darth Vader, Chewbacca and Imperial Stormtrooper. They, unfortunately, all shared the same artistic flaw in that none of these characters have pointy ears. It was for this reason why Mimoco updated all these in subsequent series. 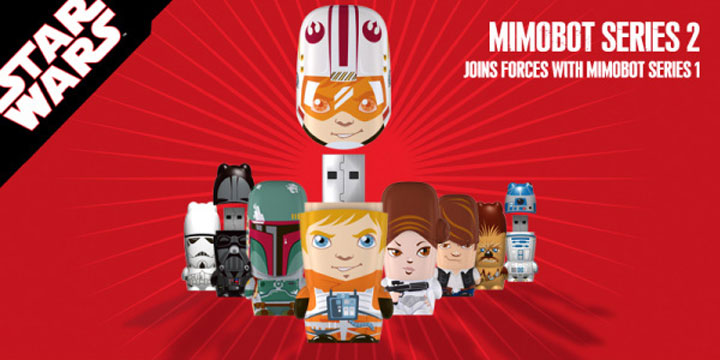 The second series saw the release of Luke Skywalker in his X-Wing pilot suit, Princess Leia, Han Solo and Boba Fett. This was the first time Mimoco adopted the nifty design that removing cap would reveal the character’s true face behind behind his helmet. 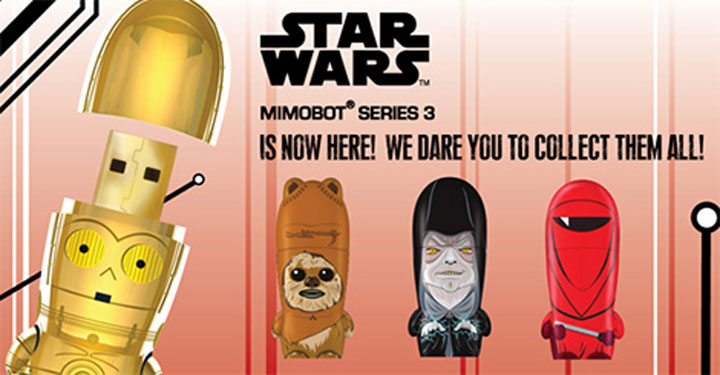 In the third series, Mimoco rolled out Wicket the Ewok, Emperor Palpatine (a.k.a. Darth Sidious), Imperial Royal Guard and C-3PO. The pointy years on the Wicket returned but for the right reason. 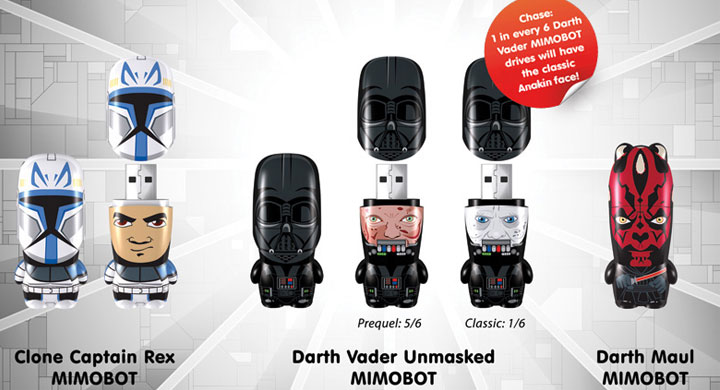 The fourth series brought the return of Darth Vader which had its ears finally removed. There was also an interesting twist. Unmasking the Darth Vader would reveal the scarred countenance of Anakin Skywalker, as played by Hayden Christensen. One in every six Vader’s would have the classic Anakin face. Clone Captain Rex from the Star Wars animated series and Darth Maul were also part of this collection.

The fifth set from Mimoco introduced characters from A New Hope. Additions included Stormtrooper suited Luke and Han; Jawa; R2-D2 (finally without ears); and the venerable Ben Kenobi. This was a relief for fans who wanted to replace the R2-D2 with an improved version. And like the previous year edition, there’s a chance to get either Luke or Han with the Stormtrooper Blind Box.

Sixth series of MIMOBOT was mostly characters from The Battle of Hoth with Wampa and Snowtrooper making first appearance. Luke Skywalker has a new Hoth outfit. Fans were also delighted to see Yoda MIMOBOT with its big pointy ears in the right place and almost in right size. 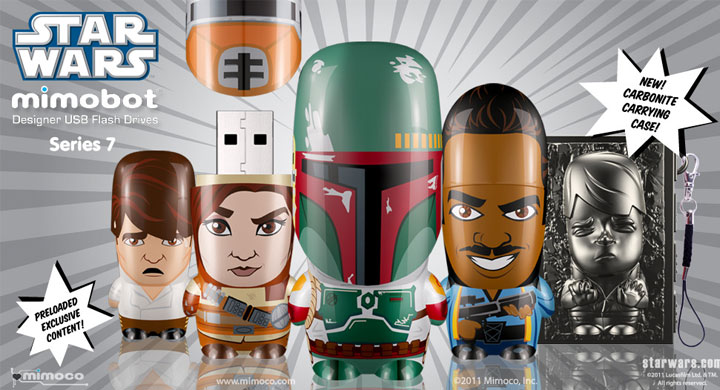 By popular demand, Boba Fett was brought back to the seventh series alongside with Han Solo in carbonate carrying case; Lando Calrissian; and Boushh. The bounty hunter turns out to be posthumously impersonated by Leia. Obviously, you wouldn’t know until you remove the drive cap.

The 2012 series of Star Wars-themed flash drives featured characters from Return of the Jedi. This time, Luke is now the Jedi Knight looking all serious and stuff. Leia is the slave, wearing her ironic metal bikini. There’s also the intergalactic crime lord Jabba the Hutt but Mimoco didn’t give him special size treatment. Admiral Ackbar – the fleet commander of the Rebel Alliance – joined MIMOBOT as well, prominently featuring his signature squid-like face.

Star Wars: The Old Republic still remains one of the most popular massively multiplayer online game since its debut in 2011. At game launch, Razer released game tie-in keyboard, headset and mouse that are especially made to aid you in your journey across the galaxy.

The keyboard is everything one could ask for. It is the first from Razer to feature a multi-touch LCD panel for everything from navigating through games to checking character stats, and from checking Facebook to watching YouTube. Feature-wise, it comes with a host of built in features including short throw / travel distance keys; 1ms response time; and built in macro keys. 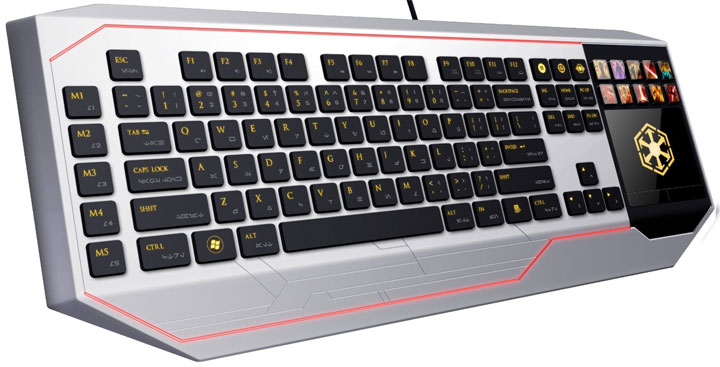 Better still, coupled with its 16-million color LED lighting system with a row of 10 OLED adaptive tactile keys above it, this keyboard should allow for even deeper immersion into the game. All these are powered by a 7-foot braided USB cable. Every key even has Aurebesh – the predominant written language in the Star Wars universe.

Next up is the headset. Its ear cups are hexagonally-shaped with interchangeable plates whose Galactic Republic or Sith Empire translucent yellow emblem lights up as soon as headset is plugged into a USB port. There’s glowing LED lighting whose color is customizable through Razer Synapse software. This gives the Razer headset a distinctive identity as well as much needed attention from nearby Star Wars fans.

The headphones utilize larger than average 50mm drivers to boost greater dynamic range. Its virtual 7.1 surround capability provided by none other than Dolby also does its best to deliver compelling 7.1 sound stage over just two drivers. Interestingly, the boom mic on the left ear cup cannot be removed to the other side which is where all the audio controls are located.

Last is the MMO mouse which is fundamentally based on the Razer Naga Epic. There are 17 fully programmable buttons in total, including 12 on the thumb grid. LED lighting on both the scroll wheel of the mouse and the wireless receiver base is controlled by Razer Synapse software, which also manages from lighting color to illumination intensity and from macros to button configuration. 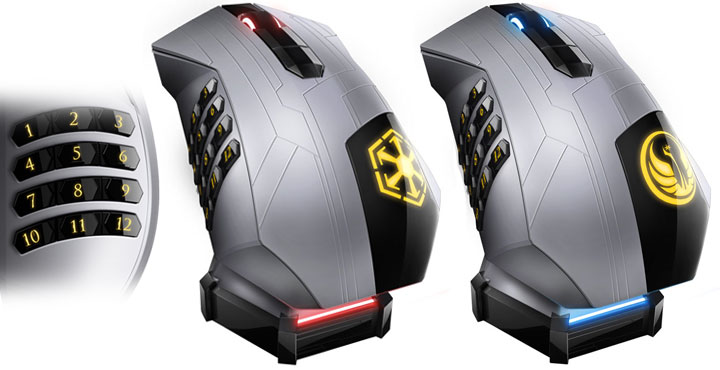 At the heart of the mouse is a 5600dpi 3.5 laser sensor. Its dual connectivity (i.e. USB and 2.4Ghz RF) makes sure you enjoy the convenience of wireless (for 12 hours during continuous use) while having wired mode in case battery runs out. In latter case, the mouse will work with a braided USB charging cable so you can keep on playing without interruption.

Whether you use these for good or evil is up to you, but be warned that with such features as well as looks as seductive as the Dark Side of the Force, you may never be able to go back to your regular peripherals again. Though with an asking price of $199 for the keyboard, $129 for the headset and also $129 for the mouse, you may just be able to resist.